Summer trading is over and fall trading has begun. As global financial markets’ participation levels rise over the coming days, the influx of liquidity will mean a new round of price discovery: reassessing conditions after a hectic few months, traders are likely to ‘reset’ their portfolios to a certain extent.

But a lay of land is ominous. The US-China trade war negotiations appear to be starting and stopping in bursts; nothing concrete has been agreed upon. The latest Brexit news suggest that both a snap general election on October 14 or a no-deal, “hard Brexit” on October 31 are equally-likely outcomes. Wasting no time, the European Central Bank has been quick to lay the groundwork for easier monetary conditions to combat a quickly souring global growth environment.

Where do we go from here? It’s a question that demands an answer, but the lack of clarity around any events means that traders are likely to keep volatility measures elevated. For most assets, this is bad news; but in an environment defined by falling sovereign bond yields and low inflation, the uncertainty created around news events at the start of September remains a bonafide positive for gold and silver prices.

While other asset classes don’t like increased volatility (signaling greater uncertainty around cash flows, dividends, coupon payments, etc.), precious metals tend to benefit during periods of higher volatility as heightened uncertainty (regarding the US-China trade war or Brexit, for example) increases the safe haven appeal of gold and silver.

Gold volatility (as measured by the Cboe’s gold volatility ETF, GVZ, which tracks the 1-month implied volatility of gold as derived from the GLD option chain) has stabilized in recent days after hitting a three-week low on August 21 at 10.98. However, it remains off its 2019 high (and highest level since December 2017) at 18.72. GVZ was trading at to 16.56 at the time of writing. 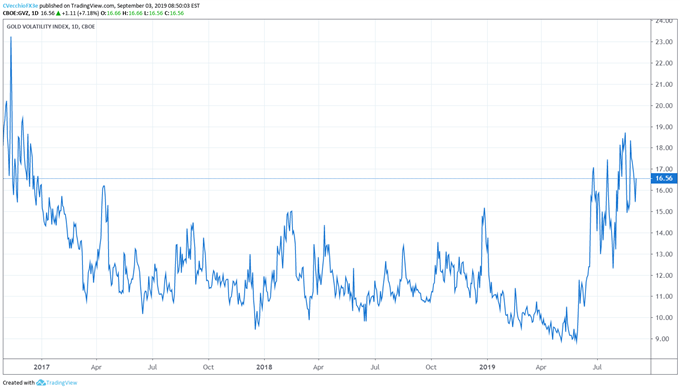 The relationship between gold prices and gold volatility has been perhaps the most interesting to watch over the past several months. We’ve pointed out this peculiarity in previous updates, but’s it’s worth mentioning again. Like at the end of May, and again at the beginning of July, gold price action has proved resilient in an environment marked by a significant pullback in gold volatility and drop in bullish momentum indicators. It would stand to reason that the current uptrend not only remains intact, but that traders are simply biding their time before engaging the uptrend. Any weakness in the near-term thus may be best viewed as profit taking rather than a top coming into place. 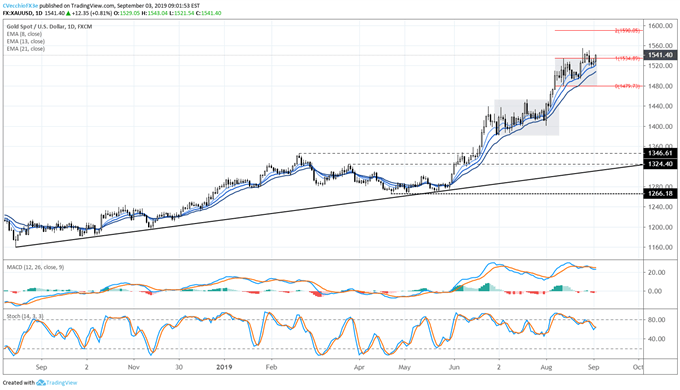 In our most recent gold price technical forecast update, it was noted that “the [August 13] doji candle’s range between 1479.73 and 1534.89 was just tested yesterday at the high end; indeed, with Tuesday’s [August 27] close at 1542.46, it now appears that a topside breakout may be underway.”

While not much progress has been made over the past week – gold prices last checked in at 1541.40 – the bullish momentum structure remains in place. The daily 8-, 13-, and 21-EMA envelope served as support once more, with the daily 13-EMA proving as significant support just like it did during the pullback in gold prices in mid-August.

The measured move for the bullish breakout around the August 13 doji candle range by gold prices is 1590.05. 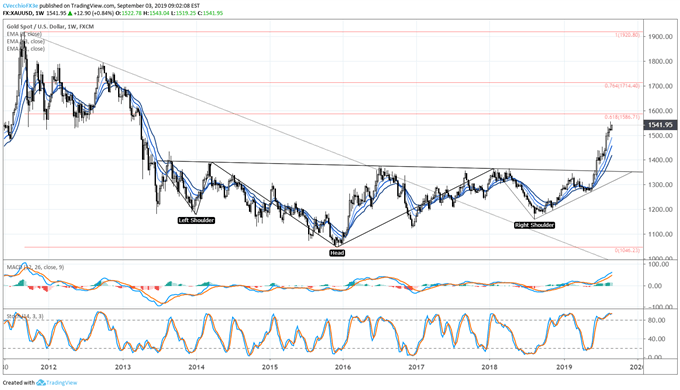 The longer-term bullish implications of the multi-year inverse head and shoulders pattern continue to guide gold prices. When the gold price inverse head and shoulders pattern began to breakout in June, it was noted that “the placement of the neckline determines the final upside targets in a potential long-term gold price rally: conservatively, drawing the neckline breakout against the January 2018 high at 1365.95; aggressively, drawing the neckline breakout against the August 2013 high at 1433.61 calls for a final target at 1820.99.”

Where do we stand at the start of September 2019? Gold prices continue to trade above the weekly 8- (two-month) and 13-EMAs (one-quarter), and both weekly MACD and Slow Stochastics trending higher. Bullish momentum remains strong on longer-term timeframes as gold prices close in on the 61.8% retracement of the 2011 high to 2015 low at 1586.71. The longer-term bullish forecast for gold prices remains intact. 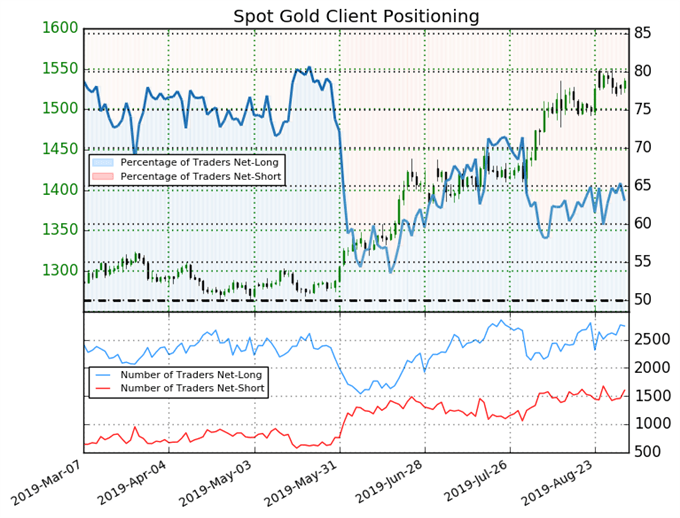