- Gold prices saw quite a bit of volatility in February, and this comes shortly after fresh yearly highs printed in January. Bulls have shown a tendency to lose motivation on tests of the zone comprising the 2016-2017 highs, and this keeps the longer-term bullish theme in check until something changes.

- While Gold prices have been softening around resistance, lower-lows and lower-highs have shown up that help to produce a bearish channel. This can open the door to a deeper bearish move before the longer-term bullish theme might be ready for resumption.

The month of February produced quite a bit of volatility in Gold prices, and this comes fresh off-the-heels of a new yearly high that was set in latter-January. Gold prices were dropping as we came into February, but after a bit of support developed around the $1,307.50 support zone we’ve been following. The bounce that showed thereafter failed to test the prior swing-high, and a bit of lower-high resistance showed up around $1,360; and this led to another lower-low as we opened into March. The net of all the above is a bearish channel in Gold prices off of those fresh yearly highs that were set in January. 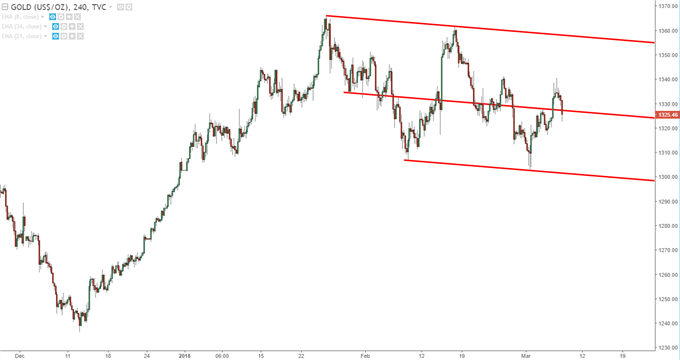 To put this price action into context, we’ve added the longer-term resistance zone that we’ve been following on the below chart. This zone runs from the 2016 high around $1,375 down to the 2016 high at $1,357.50. On two separate occasions already in 2018, prices have reversed while testing this area on the chart, alluding to the continued prospect of resistance at or around this zone. 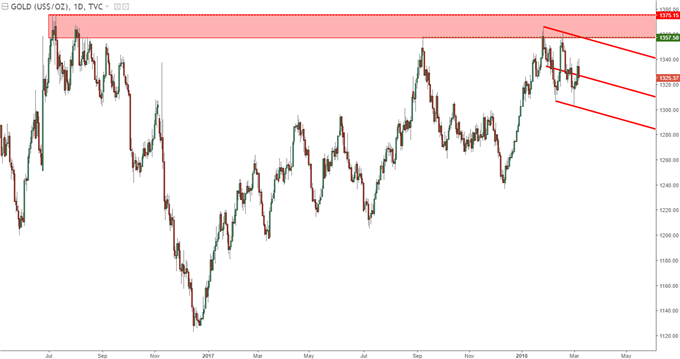 The fact that prices have continued to test resistance is in-and-of-itself a positive; but the inability of buyers to muster much strength on tests of that zone indicates that a deeper retracement may be afoot before the longer-term bullish trend becomes attractive again.

On the below chart, we’ve added a Fibonacci retracement to the bullish move in Gold prices that began in mid-December. This was a consistent move of strength that really didn’t start to see turmoil until we turned the page into February, at which point prices began to swing wildly in both directions, which can often show up ahead of a turn in a longer-term trend. A bit of short-term resistance is showing at the 23.6% retracement of that prior bullish move, and this would point to a deeper downside move before the longer-term bullish theme becomes attractive again.

Next areas of support could be sought out around the following levels: $1,316.50, $1,301.18, $1,296 which had helped to set a double-top formation last year, followed by $1,285 which is the 61.8% retracement of that previous bullish trend. The above potential support areas could also be used as shorter-term bearish targets, with a break-above last week’s swing high of $1,341.04 invalidating the bearish setup in Gold prices 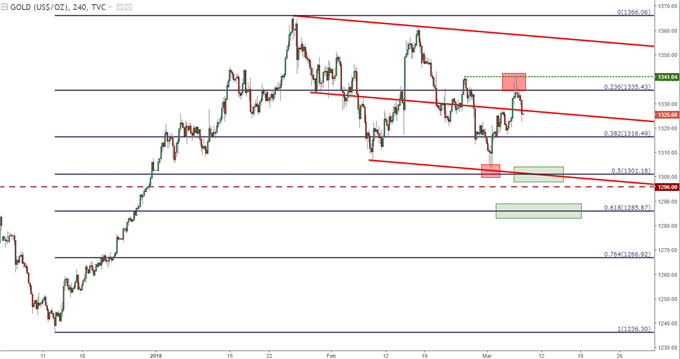