- Gold prices gained 3.34% from the Wednesday low up to yesterday’s high, a brisk move that came-in off the back of a stronger-than-expected CPI report out of the United States.

- The prior bearish tonality in Gold prices has been negated, and buyers have very much made their voice heard. Prices are now testing an area of resistance that’s been fairly strong thus far, taken from the 2017 and 2018 highs. While this does not offset the bullish advance of the past few days, it does urge caution for bulls as a deeper pullback may show before the general trend is ready to continue.

It was a big week for Gold prices, as last week’s bearish push was soundly reversed, and we’re now seeing a test of the 2017 high around $1,357.50. Earlier in the month, Gold prices started to slide below the neckline of a head and shoulders pattern. This led to a continuation of weakness as price action moved down to test a key area of support around $1,307.50, which was the third level of support that we’d looked at earlier in the month. But after that support began to show last week, bulls have re-grabbed control to push prices right back towards prior highs.

The big portion of this week’s gains came from the CPI report on Wednesday. When US inflation for the month of January came-out above expectations, a quick move of USD-strength began to show. That move was short-lived, however, as DXY traded above 90.00 for only a brief amount of time before sellers came back, with gusto, to push the Greenback right back down. This brought upon a large move in Gold prices, as price action moved from a spike-low of $1,317.27 up to a fresh near-term high of $1,361.72; a move of 3.34% in less than two trading days. 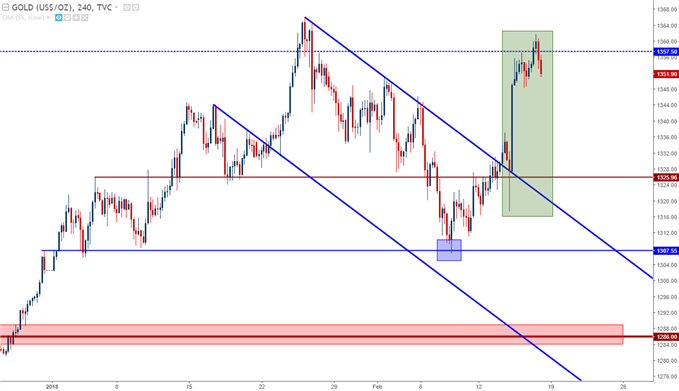 The Return of the Bulls

With the out-sized move over the past week showing quite prominently, traders would want to move forward with a bullish bias on the yellow metal. This is not to rule out potential reversal strategies, as an exhibition of struggle around current levels can open the door to as such. But for this, we’d likely want a bit more information before fading what’s been a really strong up-trend. On the Daily chart below, we’re focusing in on this area of resistance. And notice how the reversal that showed in later-January popped-up around those same prior 2017 highs, the area that’s giving us a bit of short-term resistance at the moment.

Gold Prices Bulled-Up, But Facing Resistance From the Danger Zone 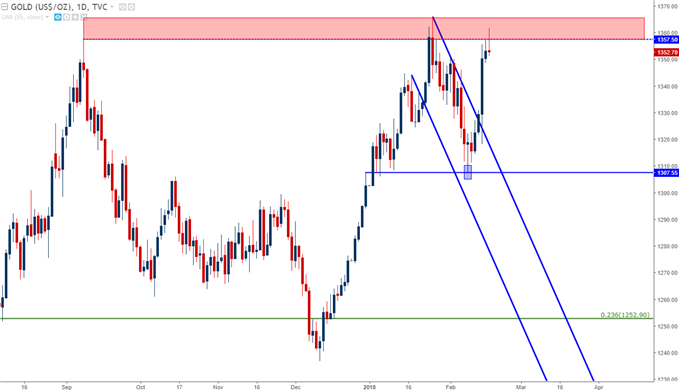 At this point, traders would likely want to be cautiously bullish around Gold prices, looking for a deeper pullback as current resistance may cap continuation, particularly as we’re moving towards a holiday-weekend out of the United States. A bit of short-term swing-low support had developed around $1,350, but traders may want to wait for a deeper support test; at a level such as $1,344 or perhaps even a bit deeper around the $1,335-$1,336 area; each of which could afford a more attractive risk-reward ratio for bullish continuation strategies. A third level of potential support has been added below, taken from the prior swing-low around $1,327, and this could be looked at as an ‘S3’ level of support for bullish continuation strategies in Gold. 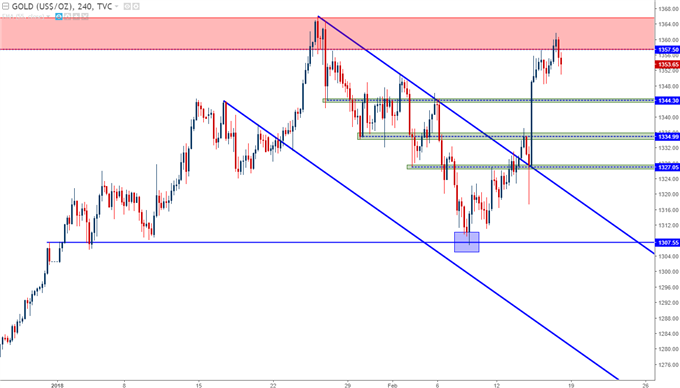