- Gold prices broke below the neckline of a short-term head and shoulders pattern.

- Retail traders are still on the long side of Gold, which may be indicating a deeper pullback..

Last week saw a bit of strength show up in the US Dollar, and this helped to soften Gold prices as a series of lower-lows and highs showed-up in the early part of the week. We had zeroed-in on a head and shoulders pattern with a neckline around the $1,326 level on Monday. That neckline support gave way on Tuesday, and prices continued their slide on Wednesday and Thursday until a deeper area of support began to show around $1,307, which was the 3rd area of support that we were looking at last Monday. 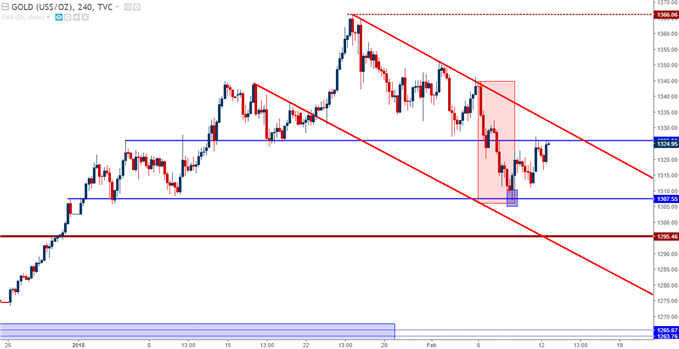 So, at this point we’ve only seen roughly half of that pattern fill in, and prices pulled back from the bearish move after our third level of support was hit on Thursday morning. As this week’s trading opened, that bullish move in Gold prices continued, and we’re now seeing resistance show-up at the same prior support that had previously demarcated the neck-line. 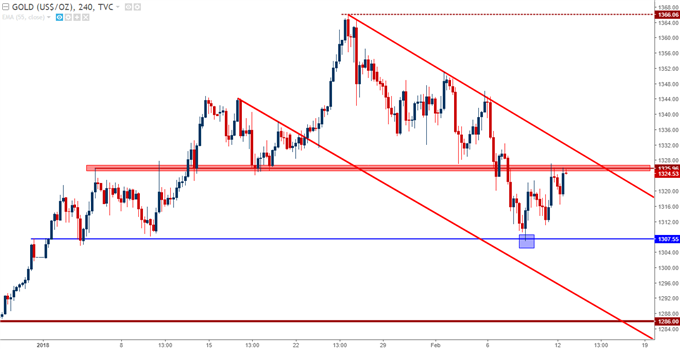 Rising Wedge Off the Lows

The resistance that we looked at above is getting a bit more worn as the session continues. On the hourly chart below, we can see multiple tests at that area that, as of yet, have been unable to tilt prices-lower. This should be disconcerting for short-side stances that are looking to take on exposure with current levels, as this shorter-term rising wedge may be indicating a deeper bullish move before bears are ready to come-back into Gold.

For shorter-term stances that are looking for a more aggressive risk-reward and are willing to take a higher-probability of eating a stop, the current setup can be worked with: The previous swing-high around $1,332 could be used for stop placement, which could be justified with a better than 1:1 risk-reward ratio if using targets at $1,312.40.

Gold Hourly: Knocking on the Door of Resistance 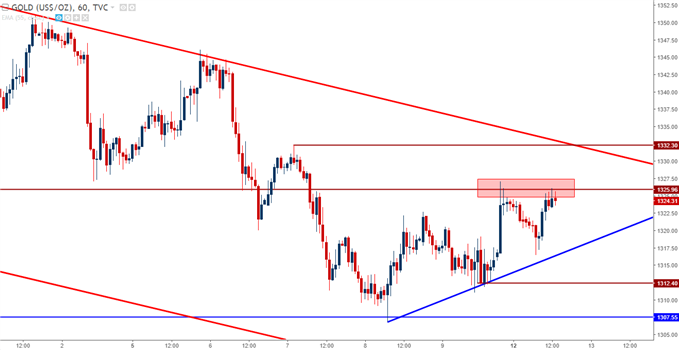 For longer-term stances or for those looking to treat the move a bit more conservatively, awaiting a break of the short-term bullish trend-line could be a strong signal that the selling is back and may run for a while longer, perhaps even to that longer-term short-side target towards $1,286. 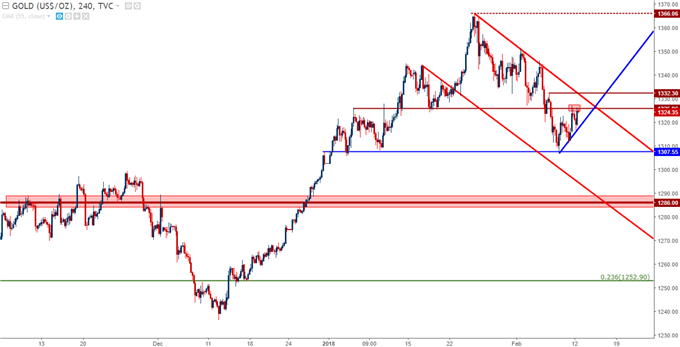