- Gold prices put in a bullish rally that has seen as much as $85 added over the past three weeks.

Just a few weeks ago, it looked as though Gold prices might be heading into another bearish trend. After catching another bout of resistance at $1,296, similar to what was seen earlier last year in both April and June, prices broke below a bullish trend-line, eventually finding some element of support around $1,240. But, just a few days later we went into the December Fed meeting; and matters haven’t really been the same ever since as Gold prices have moved into an aggressively bullish rally that’s seen 6.7% added from that prior low.

Gold Prices Daily: Bulls Take Over After 50% Retracement of 2017 Move 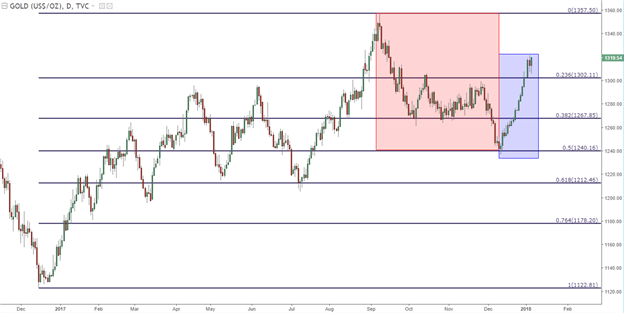 For sake of clarity, we’re looking at the four-hour chart below to focus-in on just how consistent this bullish move has been. Pullbacks have been rather scant, at least up to the past couple of days, and buyers have remained in-control for much of this period. This has led to a fairly pronounced case of divergence via RSI, denoting the challenge of chasing this bullish move in its current state.

Gold Hourly: Bulls on Parade as Prices Rally by More than $85 in Less than Three Weeks

Tomorrow brings Non-Farm Payrolls out of the United States, and this can certainly add some kerosene to the situation. The complication with bullish stances at the moment is the fact that we’re so elevated beyond both short and long-term support that fitting in a stop at an attractive level can be a rather costly endeavor. Combine this with the fact that the short-term high is less than $2 away, and justifying those wider stops can be a bit of a challenge.

The item of attraction in this bullish theme around Gold prices as we move into tomorrow’s NFP report would be looking for an NFP-induced retracement that could allow entry into the bullish trend in a more risk efficient manner. The October swing-high around $1,306 helped to dig-out short-term support after yesterday’s retracement, and that prior swing high around $1,296 could be incorporated to identify a support zone. If price action pulls back to this level, and is met with support, the door is opened to bullish exposure with eyes on a return to $1,320. 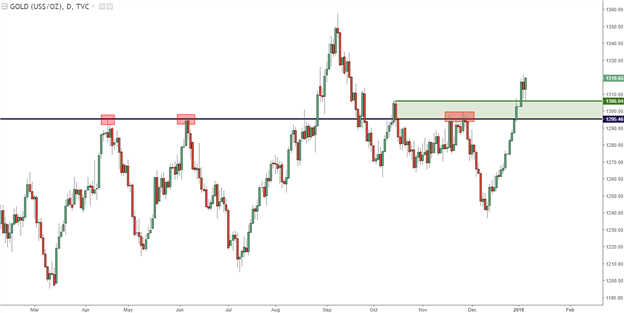