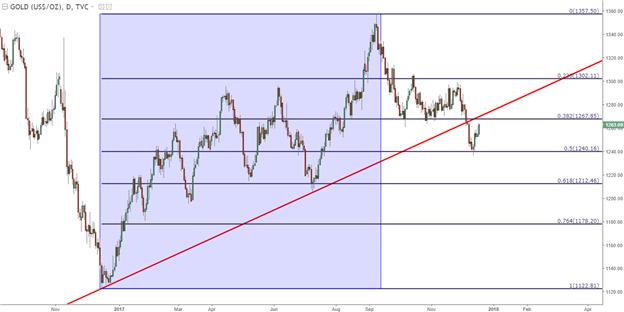 Gold Prices Seek Out Resistance at Prior Support

It’s been a strange year for Gold prices. After an aggressive sell-off showed on the heels of the Presidential election, support began to build around $1,125 as we came into the New Year. This led to a near-immediate bullish run in Gold as we turned the page into 2017, and by mid-April prices had already catapulted back towards $1,296. Just a few months later, Gold prices caught another bid, and that bullish advance extended all the way up to $1,357.50 in early-September. This amounts to a 20% gain from the December, 2016 low up to the 2017 high.

Gold prices have been on a different trajectory since that high was set in September. By early October, prices had already retraced 38.2% of that move to find support around the $1,267 level. This then led into two months of sideways price action as we approached the December FOMC rate decision. Price action broke down about a week ahead of that rate hike, with prices falling down to the 50% retracement of that move before the Fed touched rate policy.

Gold Prices Four-Hour Chart: Sideways Until Bearish Breakdown A Week Ahead of FOMC 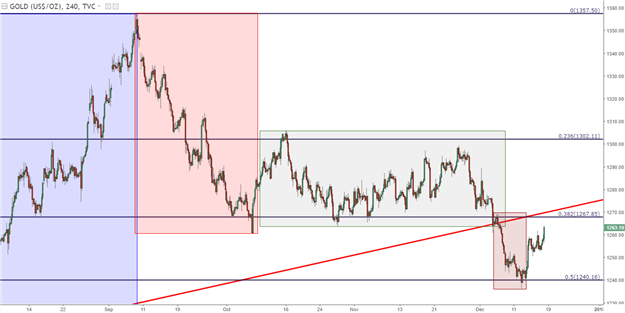 At last week’s Federal Reserve rate decision, the Fed hiked rates as was widely-expected, and the net take-away was another punch of USD-weakness. This addition of weakness in the Greenback helped to firm Gold prices after a visit to that 50% Fibonacci retracement, and this now opens the door for the prospect of bearish continuation should prior support help in forming near-term resistance.

In our last article, we looked at a zone of support that ran from $1,260 up to $1,265. We advised that traders looking to implement bearish strategies would likely want to let this zone first break to indicate the probability of continuation. After that zone yielded in early-December, bears were able to drive prices all the way down to $1,236, giving us a fresh near-term lower-low. Now, we are seeing prices trickle-higher into this prior zone of support, and that opens the door for this zone to be re-engaged as near-term resistance.

Given the additional price action that’s shown around the Fibonacci level of $1,267, traders can extend that prior support/current resistance zone to include this level. This would give us a zone that runs from $1,260.40-$1,267.85. If we do see sellers show-up here, the door remains open for short-side continuation strategies as we move towards year-end. 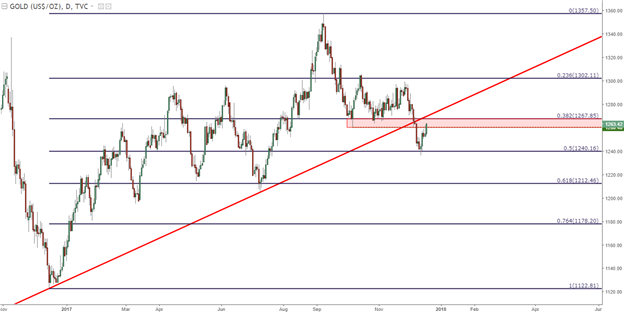