- Gold prices remain relatively confined within a ~$33 range over the past month.

- Sentiment is very stretched in Gold, with +4.22 traders long for every one short as of this writing. Given retail sentiment’s traditional contrarian nature, this is bearish for Gold prices.

- Want to see how Gold and USD have held up to the DailyFX Quarterly Forecasts? Click here for full access.

In our last article, we looked at Gold prices after the yellow metal fell back-below the vaulted psychological level of $1,300. This move capped off a rather frenetic summer that had seen multiple trends show in Gold prices; at many points being volleyed by related themes in the U.S. Dollar or, more recently, the Euro. But what’s most noteworthy about the current setup in Gold prices aren’t any trends that are being exhibited; but rather the lack thereof. Over the past month, Gold prices have been confined to a relatively tight $33 range. That range threatened to break in the latter portion of last week when prices tipped above $1,290 for the first time in almost a month. But sellers were standing at the ready to offer at the same $1,296 level that had rebuked upward advances in both April and June of this year.

Gold Daily: Resistance at $1,296 Sends Prices Back Down Towards Prior Support 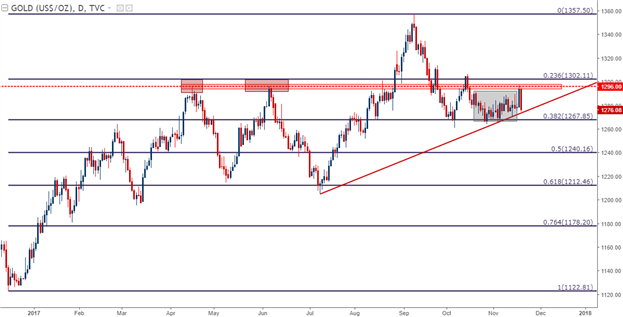 That upward advance from last Friday has already been soundly faded out of the market. After trading opened for this week, sellers took over to drive prices right back down towards prior support in the $1,270 region. At this stage, prices are finding a bit of support above a bullish trend-line projection that can be found by connecting the July and November swing-lows. Also in this region for potential support are a group of prior price action swing-lows that run from $1,260 up to $1,265. This could be a difficult area to investigate fresh short stances given the confluence of support that currently sits just underneath price action. 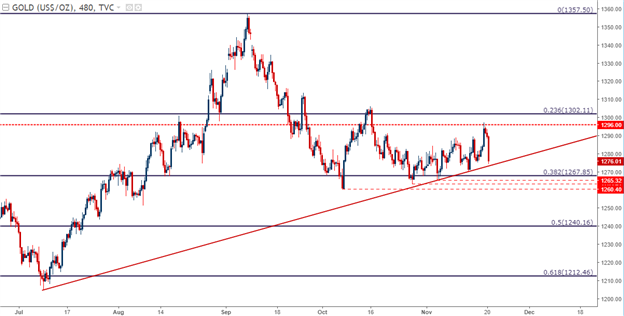 For traders that do want to investigate the short-side stance in Gold, they’d likely want to let this batch of support first break to prove that bears will actually be able to continue driving the move. A break below the trend-line could be a great first step for such an approach, but the Fibonacci level combined with the group of swing-lows below could be the recipe for a false breakout on the bearish side of the coin. A break below the October swing of $1,260 could make such a bearish stance considerably more attractive. Alternatively – a check back towards resistance with a ‘lower-high’ below the $1,296 swing could open the door for the bearish exposure; but this could still be seen as a volatile entry given that prices would still be within the prior month’s range. At the very least, it would offer risk containment with stops placed above the October high.

Regarding the bullish side of Gold prices and a reason traders may want to be careful buying off of the trend-line: One of the more disconcerting aspects around recent price action in Gold is the lack of strength when the U.S. Dollar was showing weakness. If this were a burgeoning bullish theme, one would imagine that buyers would be more active in times of USD weakness, looking to accumulate long exposure under the premise that continued bearish action in the Greenback would drive Gold prices to fresh highs; but that hasn’t really happened.

For those looking to accumulate bullish exposure in Gold prices, letting it take out the $1,300 level and, perhaps more to the point the October swing-high at $1,306.04 could make such a strategy more accommodating. Until then, be careful of getting caught in the cracks of Gold price action. 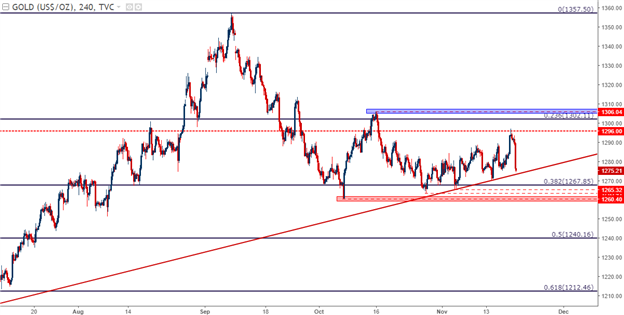