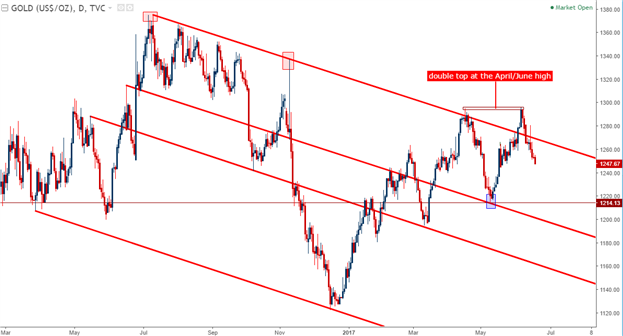 In our last article, we looked at the continued slide-lower in Gold prices after the double top had formed around the prior April high. After that top was set, Gold prices continued to drive lower, eventually re-entering the descending channel that’s held a bulk of Gold price action since last July.

During this recent bearish run, Gold prices crossed below a key support level at $1,248-$1,249, as this is the 50% marker of that bearish run that began last July. This is the same set of levels with which support had formed at the 38.2% retracement earlier in May, right around the time that James Comey was fired. The 50% retracement of this Fibonacci setup had helped to set support in March, leading into April; and this level is also very near the $1,250 psychological level that had helped to set support in Gold prices around the Brexit referendum last year. 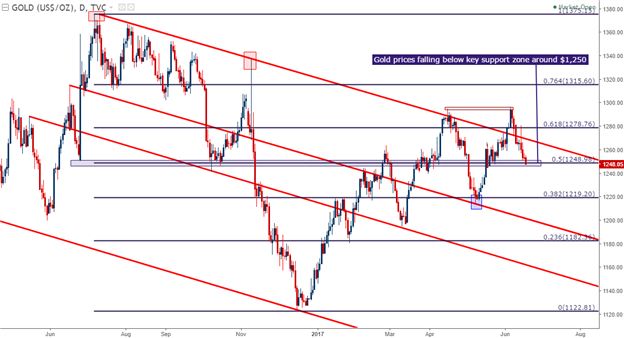 Given that Gold prices are seeing short-term bearish momentum line-up with a longer-term down-trend, traders would likely want to move-forward with a bearish bias. The fact that we’re trading below a key support zone is in-and-of-itself a bearish quality; but given the veracity of support that we’ve seen around this level in the recent past, traders would likely want to wait for a more advantageous entry point before initiating short positions, or at the very least exude a healthy dose of caution against chasing the move-lower. On the chart below, we’re looking at two potential zones inside of recent price action that could offer that ‘lower-high’ point of resistance. 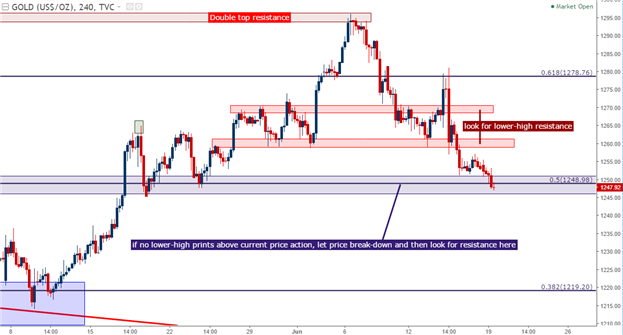 If price action does not pose a bounce in the near-term, traders can re-apply this current zone of support as a future instance of resistance. If prices continue breaking-lower from here, traders can wait for ‘lower-high’ resistance to show around this zone of prior support.

For those looking to add bullish exposure to Gold, they’d likely want to wait until there is some evidence of a near-term low being in play, which at this point does not exist.