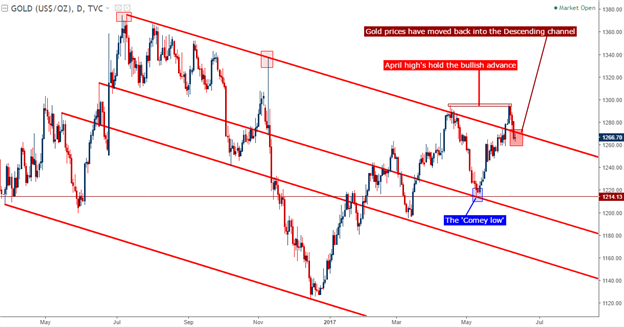 - Gold prices continued the bearish move after resisting at the prior April high.

In our last article, we looked at Gold prices as resistance had begun to show around the prior April high. And given that that bullish move had started right around the time that James Comey was fired on May the 9th, the fact that this resistance started to show shortly after his opening statement was released made sense from a perspective of risk aversion. Since then, and throughout Mr. Comey’s testimony and the shocking election results in the U.K., Gold prices have continued to be offered-lower, sinking back into the longer-running descending channel formation as shown below:

As price action was diving-lower after that statement was released, but before Mr. Comey’s testimony began – buyers had attempted to offer support off of prior trend-line resistance. On the chart below, we’re looking at the quick bounce that had developed right around the time that Mr. Comey began speaking in front of the Senate. 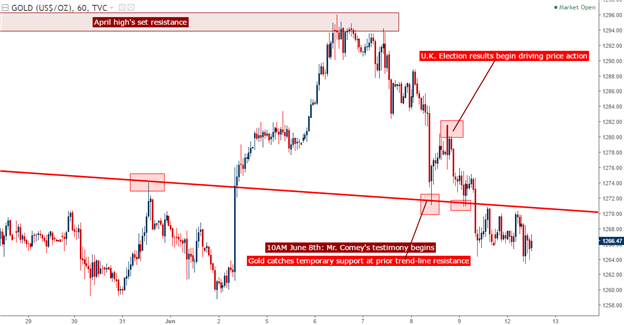 While buyers were able to hold support throughout most of the trading day on Thursday, another shocking election result out of the U.K. stole markets’ attention from Thursday evening and into the close of the week. Gold prices continued to be offered-lower through most of this period, with price action breaking back into the descending channel formation that’s been relevant now for almost an entire year.

After breaking-lower to start the week to set a fresh near-term low, support has begun to show around the 38.2% retracement of the most recent bullish move that started right around the time that Mr. Comey was fired. This level also syncs up with a prior swing high and a previous batch of short-term support that had shown when Gold prices were in the midst of their bullish advance. 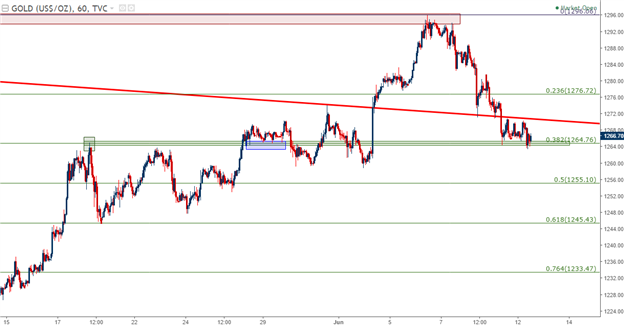 For traders looking at bearish exposure in Gold prices, this short-term support observation could be usable. Traders can incorporate a shorter time frame chart in the effort of finding short-term resistance with the goal of continuation plays so that, if this near-term support does hold, we have an area to watch for ‘lower-high’ resistance. We look at an area below around $1,270-$1,271 that could be operable for such a purpose. 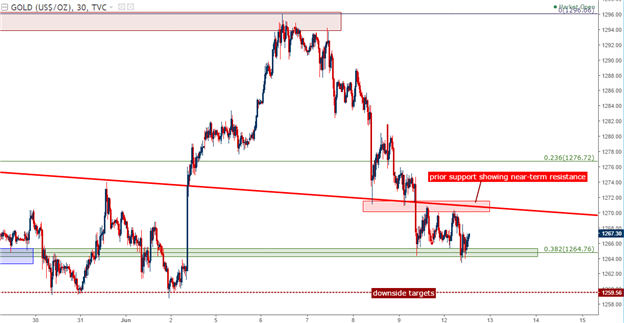 For bullish exposure, traders would likely want to wait for buyers to punch price above that $1,271 level before looking to get long. If this takes place, the current zone of support around $1,263-$1,264 could be usable for stop placement in looking at a bullish continuation move; with targets cast towards that prior April high of $1,295.