- Gold prices continued in a bullish manner until resistance showed around the prior April-high.

In our last article, we looked at the continued bullish run in Gold prices as global markets walked into a heavy platter of risk for Thursday June the 8th. As we shared, Gold prices were relatively overbought at the time, and with RSI on the hourly chart already having shown a case of divergence, traders would likely want to wait before pressing the bullish approach.

But the up-trend just kept moving until, eventually, price action encountered the prior April-high, at which point bears began to take over. This totals over $80 of gains for Gold prices from the ‘Comey low’, which printed just as news that former FBI Director James Comey was fired, around market close on May 9th. Perhaps more interesting than just the raw movement is the speed with which an aggressive down-trend turned into an aggressive up-trend with a minimum of congestion or gyration near the lows. This was a clean reversal, as if a light switch were flipped to turn the trend from bear to bull in the blink of an eye (or a news report). 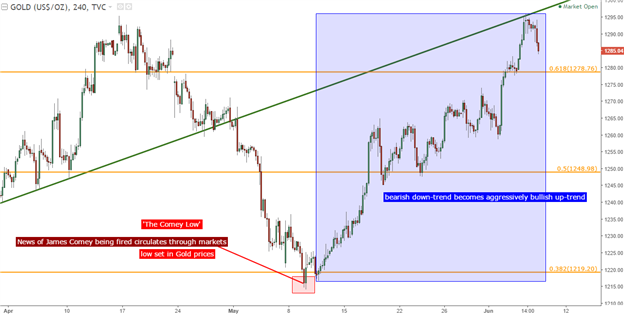 But as prices continued to run-higher yesterday, resistance began to show off of the April high around $1,295. Also in this area is a projected trend-line from the previous bullish move in mid-April; the projection of which runs into current resistance. 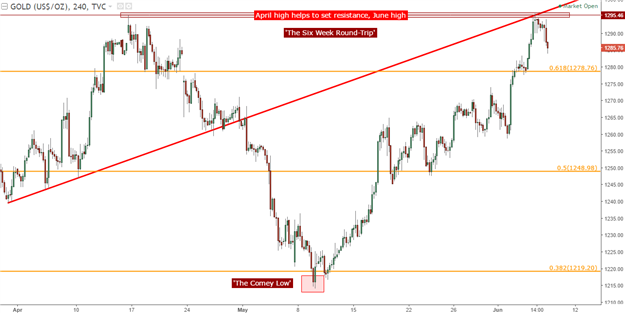 Collectively, the past six weeks of price action in Gold have produced a V-shaped reversal, with the Comey low serving as the fulcrum point of the reversal; with price action running into a potential double-top formation off of the April-high. 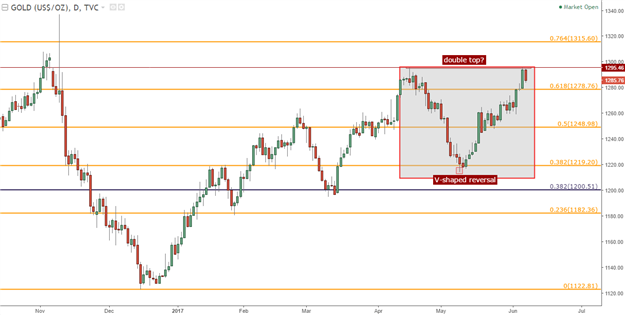 After Mr. Comey’s opening statement was released ahead of tomorrow’s testimony, Gold was offered lower off of that resistance at $1,295, and so far we’ve seen price action follow-thru. However, to confirm that a double top is, in fact, in place, we need to first make sure that what we’re seeing is a near-term top. Traders would likely want to let bears punch through the prior swing-low at $1,277 to prove bearish continuation potential of this recent move off of resistance, at which point the door will be opened for bearish continuation strategies. 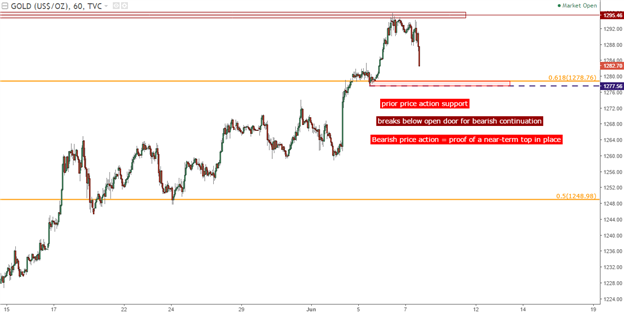