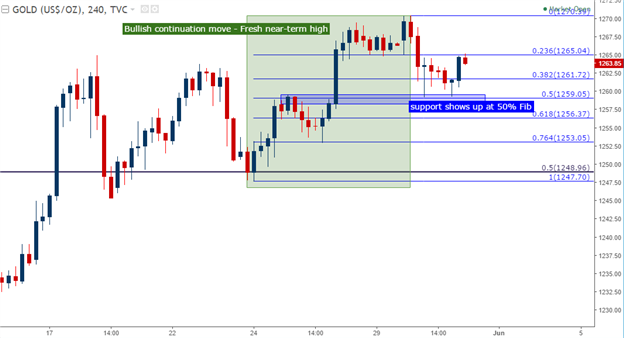 Gold Prices Bounce Off of Higher-Low - Are More Gains in Store?

- Gold prices have continued the bullish May run, but a big zone of potential resistance looms ahead.

In our last article, we looked at the recent bullish trend in Gold prices after price action had retraced down to a key Fibonacci level around the $1,250 zone of support. As we moved into last week’s close, Gold prices caught a bid to ascend to another fresh near-term high; and as we opened into this week, buyers drove prices up to yet another new high before a retracement came-in.

But shortly after that retracement started, buyers showed up to offer another element of support; giving us a near-term higher-low in Gold prices, which happens to reside around a prior area of swing-high resistance around $1,259 (as well as the 50% retracement of the most recent bullish move).

This leaves near-term Gold prices in a bullish position, and traders executing near-term strategies can look for bullish continuation of the trend that had started earlier in May and has now seen over $40 tacked on to Gold prices over the month. Traders would likely want to look at targets on long positions around $1,273-$1,279.

Within this zone of potential resistance from $1,273-$1,279 is a batch of resistance that has both a trend-line projection from a longer-term bearish channel, as well as a key Fibonacci level of the longer-term bearish move. A subsequent re-test of this trend-line will likely bring a pause in the up-trend, at a minimum, and this could be an ideal area to plan for profit targets on long positions. Should resistance begin to hold around this trend-line projection, the door could be opened to bearish reversal plays given that risk can be controlled with a relatively tight stop. 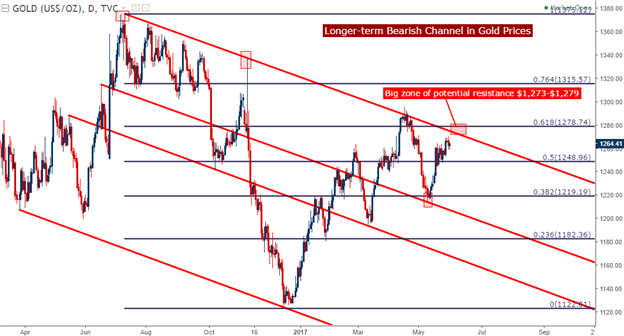