When the Fed hiked rates in December, Gold prices bottomed and then spent much of the next 2 ½ months rallying. And then again in March, the Fed hiked rates shortly after which Gold prices set a ‘higher-low’ before rallying for the next month. As of now, that most recent rally hasn’t yet calmed, and prices are continuing to volley-higher while geopolitical pressures mount.

That December rally brought on a gain of 12.6% to Gold prices into the end of February, while the most recent iteration of that rally that started just after the March rate hike is 8.4% higher with yesterday’s print at $1,295.

But right around yesterday’s high is a very clear trend-line that can be found by connecting the July 11th high to the November 9th ‘election night spike’. So far, sellers have reacted as price action has moved-lower yesterday shortly after testing through that trend-line, thus, giving us a reaction right at the level. 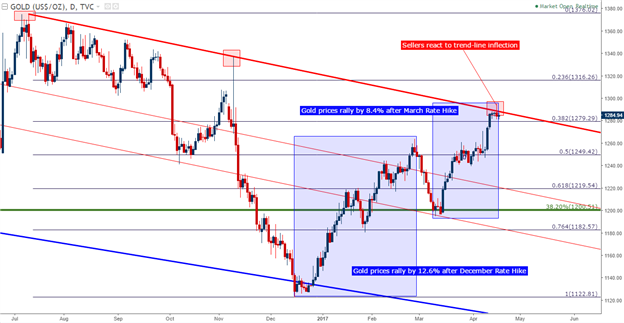 For near-term directional stances: Traders would likely want to stay cautiously-optimistic of a continuation-move higher, as the geopolitical pressure that has helped to extend this rally does not appear to be close to abating. This would also highlight the dangerous aspect of short positions in the current environment, as another surprise missile test or an overnight tweet may trigger even more concern around geopolitical pressures which can further drive Gold prices-higher. Shorts may simply want to avoid this potential for adverse excursion.

For those that do want to investigate bullish exposure in Gold prices, the shorter-term trend is still a bit overbought as RSI on the 4-hour chart is just now coming off a fairly clear case of divergence. We’ve included three zones to watch for support in the effort of catching the ‘higher low’ in an extension of the rally in Gold prices. 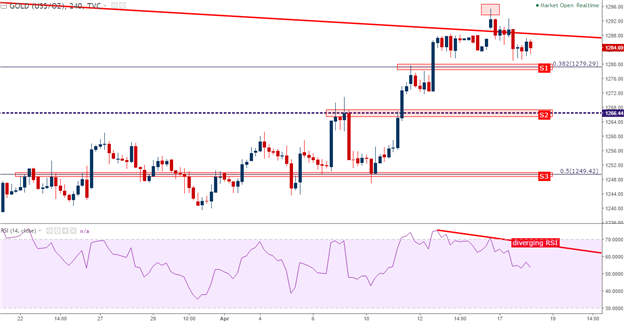 For the bearish side:

The bearish side of Gold prices has really only seemed prominent in those periods where the Fed is talking up higher rates ahead of an impending rate decision. This was the predominant theme after the election as the ‘reflation’ trade got further priced-in to global markets, all the way to that December rate hike. But given this recent up-tick in geopolitical tension, there may be a synergistic effect taking place in which Gold prices are running-higher as risk-aversion bets increase, while this may also be seen as a deterrent to future rate hikes as the newly-installed Trump administration grapples with military issues rather than driving fiscal stimulus.

So it would appear that two things would be needed to really stoke the bearish side of Gold prices, and that would be a) a more hawkish Fed just after a rate hike a month ago and b) a cessation of geopolitical pressures on the Korean peninsula. Both of these seem unlikely in the current context, much less for both to take place at the same time.