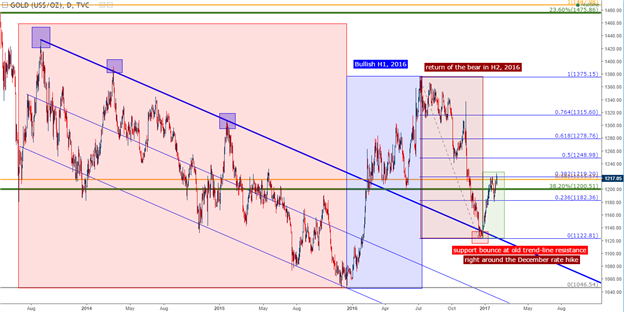 Gold prices have been on a veritable rollercoaster over the past three months. After a dramatic drop on the night of the Presidential election in November, Gold prices continued running-lower in the month after. But ever since the Federal Reserve hiked rates in mid-December, price action in Gold has been aggressively bullish; retracing a large chunk of that prior down-trend as buyers have continued to push prices-higher. But more recently, that bullish-move has begun to show signs of slowing or even breaking-down; with the potential for a return of the bearish price action that dominated Gold markets for much of the second half of last year. On the daily chart below, we’re looking at the recent trends in Gold prices, with emphasis on this most recent-bump higher after a support bounce right around the December rate hike.

On the hourly chart below, we focus-in on the more recent bullish move that’s developed after the FOMC rate hike in December, with the inclusion of this week’s price action after FOMC. 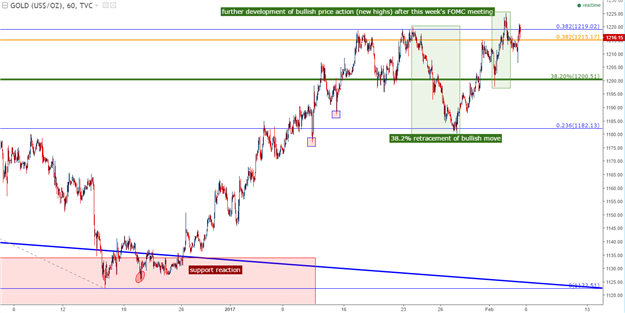 This divergence between Gold prices and the Federal Reserve’s rate hike plans is very familiar to the price action that was seen in the first half of last year, when the Fed persisted that they were looking to hike rates multiple times in the year (first looking for four hikes, then three, and then two until, finally, we got one in December). Markets didn’t buy that, and, of course, it didn’t happen, as Gold prices spent most of the first part of 2016 rallying-higher.

But it was around the Jackson Hole Economic Symposium that this theme began to shift, as a trio of Fed speakers allayed their rate hike plans, again, and markets began to listen. This slowly helped to build support in the U.S. Dollar leading into the Presidential election, at which point everything spiked on the evening of November 8th, leading to the development of the predominant trends that are still hanging-on in many markets. The U.S. Dollar continued to stage a near-historic run as we moved into the December Fed meeting; and when the bank hiked rates while saying that they were looking for a full three hikes in 2016, the Dollar began to surge again.

But what didn’t show back-up was the down-trend in Gold. Gold prices began to run-higher after that rate hike, and save for a 38.2% retracement of the bullish move in mid-January (shown above), price action has continued to show bullish posture. Of particular note to the continued development of that bullish posture is a current zone of resistance between the $1,215-$1,220 levels. Price action has made numerous attempts to overtake this confluent zone of resistance, with sellers responding in each instance. For those looking at top-side strategies, they’d likely want this long-term zone of resistance to become resolved with higher-prices before pushing bullish approaches. Conversely, a test of prior support levels at or around $1,204.76 or $1,200 could open the door to approaches utilizing $1,215.17-$1,220 as a quick top-side target. 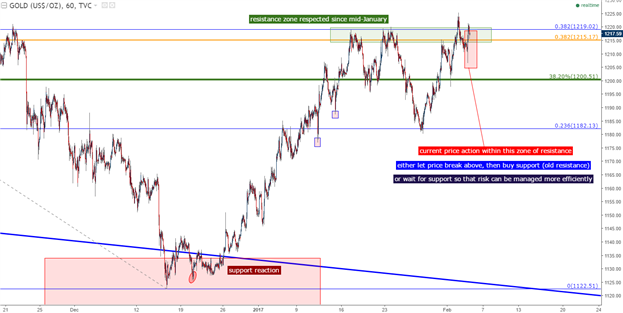 On the bearish side of Gold prices, we’re likely going to need some type of catalyst to kick-off the bearish price action. Last year, this was persistent Fed speak as we moved into the elections and then the Fed’s December meeting. But the next Fed meeting isn’t until mid-March, and there is scant expectation for a hike there. So, bearish approaches should remain cautious until some indication of reversal of this bullish move begins to show.