In our last article, we looked at the stark about-face that was seen in the Gold market at the beginning of June. After running higher for much of the year, Gold prices were slammed with aggressive price action throughout May as various members of the Federal Reserve talked up the prospect of higher rates. This was a pronounced change-of-pace after the world’s largest national Central Bank had taken on a pattern of dovishness in response to the out-sized risk aversion at the beginning of the year. But that dovish, more accommodating backdrop was enough to bring life back to risk assets, such as stocks, as the S&P 500 throttled up to new highs. As stocks ran to new highs, the Fed began to talk up the prospect of 2-3 hikes in the remainder of 2016, which deductively made June somewhat of a ‘sweet spot’ for rate setters, as it’d be unlikely that the bank would try to push through two hikes within a time-span of a few months.

But much of that changed on June 3rd after an abysmal Non-Farm Payrolls print highlighted fragility within the American economy. After that disappointment that saw only 38,000 jobs added when markets were expecting 160,000, it became obvious that the American economy wasn’t on the solid footing that the Fed had hoped. And further, it made the prospect of a rate hike just three weeks later seem like a far-out prospect; and this has created considerable selling in the US Dollar, bringing Gold prices along for the ride as the Fed hit another stutter-step in trying to move rate expectations higher only to see them get priced-out of markets.

The technical formation on Gold has been operating with many levels of interest. The low in May came in at a long-term Fibonacci level of $1,200.41. This is the 61.8% retracement of the 40-year move in Gold, taking the low of $34.95 from 1968 to the $1,920.80 high in 2011. And after finding resistance ahead of that NFP report at $1,217.26, which is the 38.2% retracement of the prior move, Gold prices staged a breakout beyond resistance and have continued to drive higher. This morning another level of interest came into play at $1,283.82, as this is the 61.8% retracement of 1999 low to the 2011 high. This is also a level that’s come into play quite a bit in the recent past in Gold, as this was the March swing high and the final swing-high in May before the down-trend move came into play.

Traders can use this level in a couple of different ways. For those that want to get long Gold ahead of FOMC in the anticipation that the bank will offer up some form of dovishness, either in the form of a reduced dot plot matrix or just cautious commentary, they can look to buy support as it shows leading up to FOMC. The prior high/low in the $1,270 vicinity could function for this purpose, but its critical for support to actually show before looking to get long. We discuss using price action to trigger entries in such a manner in the aptly named article, The Price Action Trigger. Alternatively, traders can wait for $1,283.82 to give way to even higher prices, and can then look to buy support on this prior area of resistance. The benefit of the latter method versus the former is the confirmation that current bullishness can provide the ammunition to break through resistance. 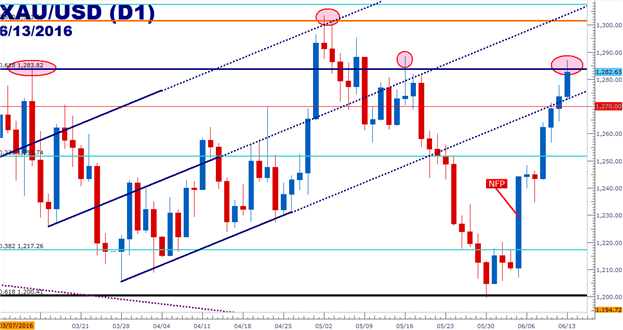