In our last article, we looked at another long setup in Gold ahead of a trove of Central Bank announcements. This was an extension of the same themes that we looked to play over the previous three months, as we had watched Gold form a bottom, then churn near support, and eventually breakout to the upside. And after that initial top-side breakout over the vaulted Fibonacci level at $1,087.50, there were numerous top-side setups available off of support, as we had identified in early February, and again a couple weeks later. This led to the most recent setup ahead of those Central Bank announcements in March that led to a stop, and we now sit flat.

At issue is the retracement that’s come in since the most recent swing-high was pegged back in March. This high came in right at a key Fibonacci level at $1,283.82, which is the 38.2% retracement of the secondary major move in the pair, which is taking the low from the year 1999 at a price of $253.30 up to the 2011 high at $1,920.80. So this is and was recently confirmed as a key level in Gold, and since that resistance came into play a relatively smooth downward-sloping channel has developed, which, when taken in context with the bigger-picture top-side breakout, is a bull flag formation.

For those that want to treat the move aggressively, they can look to recently tested support values to plot for an extension-like move in the bigger picture up-trend. The key level in the current setup is at $1,217.26, which is the 38.2% retracement of the prior major move, taking the January 2015 high down to the July 2015 low. The past four trading days have seen price action catch support in this vicinity, and this could provide motive for top-side entries. Traders can look to lodge stops below the $1,200.41 level, which is both a major psychological level as well as being the 61.8% retracement of the ‘big picture’ move in Gold, taking the low of $34.95 set in the year 1968 up to that same 2011 high (shown in black on the below chart).

Profit targets can be directed towards those same levels that we had looked at previously, with the $1,251.74 offering a ratchet level with which initial targets could be realized while also adjusting stops to break-even. After that $1,283.82 becomes a level of interest as we had discussed earlier, and should new highs come in targets could be sought at $1,301.61, which is the 50% retracement of the 2008 low to the 2011 high. 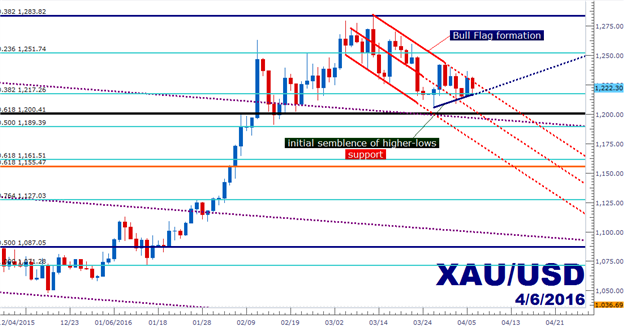