Gold Prices: A Nickel from the Stop to $50 Up and a New Top

In our last article, we looked at a long position to play the top-side reversal in Gold. And just two days later it looked as though that trade would be stopped out quickly, but support came in 5 cents above that conservative stop at $1,071.28, and the trade remained alive. Since then, prices have popped by ~$43, and three targets have been cleared with the most recent being tagged on this swing-high at $1,127.03, which is the 23.6% retracement from the most recent major move. In the article before that, we looked at the prospect of that previously painful down-trend reversing as support was attempting to set in around the $1,050 area, and in the month since those two articles were published we’ve witnessed a full-on trend reversal here in Gold. And in mid-December, just ahead of Federal Reserve’s expected rate increase, we warned you not to chase the short-side trend. Gold Prices: Don’t Get Caught Selling Bottoms.

Since our most recent article, quite a bit has changed. Risk aversion is increasing mightily across the global spectrum, and Central Banks have begun to sing that same familiar tune of ‘looser for longer.’ This, combined with the prospect of the Federal Reserve backing down from their expectation to hike rates four times in 2016 has helped to provide a surge in Gold prices as the Dollar sells off and few other currencies look attractive for flows to trickle in to. After all, this was really the impetus behind that magnanimous run that we saw from 2008-2011, right? TARP and then QE was triggered at full-steam and this only increased the expectations for inflation down-the-road. But that inflation never came, and more and more QE was poured into markets and Gold prices dove as more QE just served to disconnect asset prices from actual economic data even further than it already was.

Now, with all of that said – be extremely careful if trading Gold via a correlation or a proxy right now. A lot of people like correlations because they make them feel comfortable, like a duvet. But markets aren’t made for comfort. Sometimes things will move together, and others they won’t. Correlations, like trends, break down. And if you base your analysis on faulty assumptions and premises, well, by utero, your analysis will too be faulty. It takes experience to learn this, and that costs a lot of money. Trade the chart of the targeted asset. In this case, we’re looking at Gold.

Gold is surging right now. The Daily chart is showing higher-highs and higher-lows, and higher-highs are even beginning to become evident on the weekly chart, so we may be in for some prolonged top-side rip in Gold prices. The difficulty in setting up the long side is just like we saw on that last setup, the swings are likely to be wild here. Tight stops beware, because simple whip can trigger you out of a position that otherwise could’ve worked out beautifully. So we must take this into account in our analysis: The environment always dictates application of approach, not the other way around.

A more conservative manner of setting up Gold (with the potential risk of missing the trade) would be to wait for prices to continue to moderate lower. After the Fed’s meeting yesterday, we’ve seen some USD strength come back into play as they did nothing to back away from the four-hike expectation for 2016. So this retracement in the up-trend of Gold may last for a few more days, at which point a lower point-of-support could offer a more accommodating entry. We can use that same support zone that we were looking at for a potential stop in the more aggressive setup to seek out the ‘higher-low’ before the next leg of the up-trend. Slightly deeper, we can look to that previously critical level of $1,087.05 for support. Stops on these positions could be cast towards that $1,071.28 level, and should that level break – the bullish up-trend in Gold is no longer attractive enough to continue tracking. That’d be time to begin looking short. 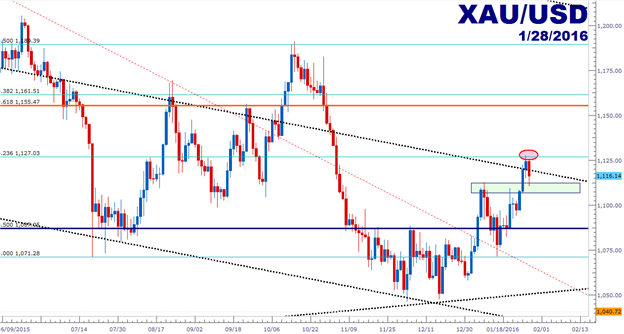