What stops a trend? There are a litany of answers that can fill in here, and many of them are ‘right’ to some degree or have at least some pertinence, but if you really get down to brass tacks – what is it that kills a trend?

At it’s core, all trends stop (and all prices are driven) for two very simple but related reasons: New buyers/sellers or a lack thereof. That’s really it. Much of financial media is focused on the inputs compelling those forces, but in it’s most simplistic form – price action is really just driven by sentiment. It’s the reasons driving that sentiment that has the world transfixed on the news. If something really bad happens, a bunch of new sellers will often want to jump in the market and this can drive prices lower. Eventually, anyone that wants to sell has sold; and it doesn’t matter how bad any forthcoming news might be – if there are no new sellers or no new short positions, prices will cease their downward descent.

This is somewhat of the opposite of a bubble building. Let’s take the housing bubble: Rates were driven really low in an effort to invigorate the American economy after the tech bust; and these low rates drove home purchases. For many on the sidelines of the real estate market, those low rates in 2003-2004 were reason enough to jump in and buy. And as more people acted on these low rates, the demand for homes shot higher and this brought prices along with it. And all of the sudden ‘flipping’ real estate became a thing. People were buying 2 or 3 homes under the premise that ‘real estate always goes up.’ This lasted for about 4-5 years until eventually, anyone that wanted to buy a home had one – and in many cases had two. At this point, there were way more sellers than buyers, and prices started to crack lower. At it’s core, this is what popped the real estate bubble: Sentiment.

These cycles are a constant in markets. In a strong market, bad news gets shrugged off and good news gets accentuated. In a down market, the exact opposite is true, as good news goes by the wayside and bad news becomes the object of the market’s focus. Sentiment is the defining factor that determines how any individual data point gets priced-into a market and this, unfortunately, is a very subjective thing.

This is what can make learning markets so difficult. Even if everything in the world is pointing for prices to go lower, if there are no new sellers, prices will not move lower. Many traders get caught chasing their tails because of something that ‘should’ happen but doesn’t; and this is because markets aren’t a binary a-b mechanism that will automatically or always move lower on bad data or higher on good data. Relativity matters here.

Sentiment has been one of the prized strategy-inputs on Wall Street for years for just this reason. A Wall Street bank could simply look at what markets their customers were short of and could anticpate the inevitable buying pressure that would accompany the closing of those short positions. Or alternatively, they could look at which markets had heavy long exposure from their clients and get short to anticipate the inevitable selling pressure. This was one of the more attractive strategies because it was simple and logical. This is also why FXCM began giving out positioning information with the Speculative Sentiment Index (SSI) on currency pairs, to help traders get an idea of which trends may be opportunistic based on relative positioning (where other traders are). You can check out and follow SSI in a real-time format at this link.

In the case of Gold, we’re looking at a beaten-down market that can be utterly unattractive to be long of. We’ve just set a new 5-year low earlier in December, and we’ve been unable to see a new high since the first week of the month. Perhaps more to the point, the Federal Reserve is sticking to this whole ‘4 rate hikes in 2016’ idea when the market is only looking for two. For most intents and purposes, traders would be rational to expect some degree of USD-strength moving forward. So most factors appear to be all pointing lower. But this is the place where traders want to be cautious. Because even with all of these reasons being very obvious and apparent – prices have not moved lower. Something is amiss. After setting that fresh low in early December, we saw a higher-low come in on Fed Day (December 17th), and since then Gold has pretty much been chopping back and forth.

This isn’t the first time something like this has happened to Gold this year. In July, Gold was dropping like a rock attached to an anvil. July 20th was especially brutal as Gold prices fell from $1,134 all the way down to $1,071.28. Sellers continued to attempt to drive prices even lower, but a higher low showed up on July 24th, and this led to an outsized bullish move all the way up to $1,190.42.

Fortunes can change on the turn of a dime in financial markets, both literally and figuratively.

But as rate hikes out of the United States became a more likely prospect, we saw US Dollar strength take over in mid-October; this re-triggered the down-trend in Gold that brought prices right back towards those previous lows. The most recent low was set on December 3rd after the European Central Bank shocked the world by not increasing their QE-outlay as many had expected. Two short weeks later and Gold prices were driving lower again. But this time, Gold was unable to break support. No new sellers jumped in the market to drive prices lower, and on December 17th a higher-low was set; and this may be indicating that the down-trend, at least for now, may be near completion.

But just because a market isn’t ‘as bearish’ doesn’t automatically mean that it’s bullish. For now, all that we know is that sellers are waning, and that a reversal may be afoot in the not-too-distant future.

Traders can balance this flurry of variables by relying on the most relevant indicator available: Price. Price is the great differentiator because that is what denominates sentiment (people/investors’s perceptions change as prices move). If a new low is set, if that low in early December can be broken, the short side of Gold is far more compelling: But for now, this is chop, and it should be treated as such.

On the reversal side – we can adopt a pertinent level that’s been a big part of Gold’s recent price history at $1,087.05. This is a 50% Fibonacci retracement of the ‘big picture’ move in Gold, taking the low at $253.30 set in 1999 to the high of $1,920.80 set in 2011. This level is shown as a blue line on the attached chart below, and you’ll notice how this had functioned as pivotal support in July and then pivotal resistance in November. Should price action climb above $1,087.05, there may be an attractive top-side position available under the premise of a reversal. Until then, buying Gold may be too daunting a prospect to lure many other new buyers into the equation (which is what will be needed for a continued top-side run in Gold).

On the bearish side, again, caution is important here because Gold prices have stopped going down, at least temporarily, and this may be a warning sign that a reversal is near as the bears have run out of steam, at least for the near-term. Traders could look to new lows below the ‘higher-low’ on December 17th to reignite the down-trend. This level comes in at $1,047.55, and should a new low get printed then the down-trend is back and traders can look to sell short.

Until then – be cautious of the chop. This is one of those price action messages that may be telling us quite a bit without telling us anything directly; and that is the inability of sellers to drive prices to new lows despite the litany of reasons that they have to do so. 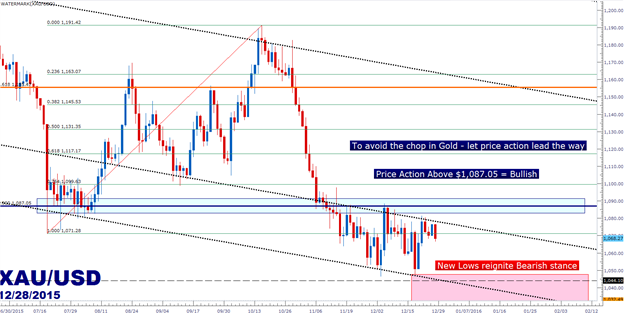