One of the hallmarks of a ranging or congested market is the litany of possible support and resistance points that will pop up as prices chop back and forth. This can be a good thing, for the trader that’s carrying a bias in that market can essentially use those levels to plot their approach. As in, if you know you want to get short, you can simply wait for an extended wick on the top side of price action to highlight the potential for a bearish reversal; and should this situation crop up, you can look to place a stop above the high and play for the move lower. Even better is if that extended wick goes through a potential resistance level that other traders may be watching as a line-in-the-sand for future short positions; and to take this a step further, we can look for really strong long-term support or resistance levels to get an idea for which levels may elicit the strongest reactions.

This support held fantastically in July, as the bears were eventually thwarted by considerable buying interest, eventually pushing Gold all the way back up towards $1,200; but three months after leaving this support zone (almost to the day), price action had returned to the lows. We looked at this support inflection in early November as this level came back into markets. But this time, support didn’t hold. Over the next two weeks, Gold prices gyrated along this level until, eventually, we were seeing resistance at this old support value. This is a price action tell that can give traders a clue as to when trend resumption may be opportunistic.

We looked at such a setup a week later, and then another setup two weeks after that, both using the same logic of selling new resistance at old support. And there were two instances in which we urged caution whilst trading near lows and away from resistance: We discussed this at length in the article, The Carnage Continues in Gold Prices, and You Have 3 Choices, and with less depth in the article Seeking Out Support from the Two-Year Channel.

This article is going to be another ‘wait and see’ approach as Gold is currently sitting very near longer-term support, and while the potential for continue down-side break is certainly there, the cost of chasing the move could be considerably more expensive given the distance from that $1,087.05 resistance.

For traders that do want to press the short position, tighter stops could be investigated above the Friday high at $1,180. But even this ‘tighter stop’ would carry approximately $17 of risk with current market prices, and given the recent low being $17 away from current prices, only a 1-to-1 risk-reward ratio would be available. So traders that would want to use this tighter stop would likely want to push their price targets down below recent support, which could be daunting.

Alternatively, traders could wait to see if price does move closer to those prior resistance values, at which point they may be able to position into a trade ahead of FOMC on Wednesday.

But for now, we’re very near support. Be careful of chasing if you aren’t already short. Because one of the worst things that can happen to a trader is getting caught selling a bottom in a reversal market. 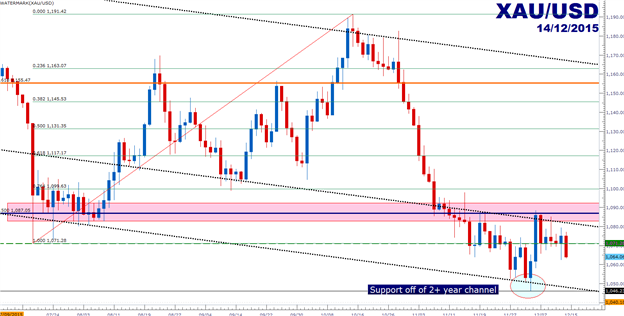