Gold Prices: Seeking Out Support from the Two-Year Channel

In our last article, we looked at the continued down-trend in Gold prices that has continued to run as we near the pivotal December FOMC meeting in which much of the free world is expecting that first rate hike in over nine years. It’s really seemed like a foregone conclusion that a hike was coming after the October Fed meeting saw the bank take on a more hawkish stance towards rate hikes, which was shortly followed by a blowout NFP report that made that hawkish stance seem even more confirmed.

One of the more prominent victims of this expectation for higher rates and tighter policy out of the United States has been Gold. To be sure, we’ve seen USD-strength on the back of this expectation for higher rates, but that’s really only a portion of the move. As we discussed in our last article, we’ve seen USD move up by approximately 2.8%. In the same span of time, we’ve seen Gold move lower by over 11.5%. So, surely, some of this is a stronger Dollar, but that doesn’t explain the entirety of the move. There has been exogenous selling pressure here and that’s whats exciting for the prospect of continuation in the trend.

Much as we investigated in our last piece, selling at lows can be a daunting prospect. We’ve covered this a few different times in relevance to Gold over the past month as price action has been hurdling lower and spending quite a bit of time at support. We extrapolated on this topic in the article, The Carnage Continues in Gold Prices and You Have Three Choices. We reiterated this approach in the Technical Outlook piece that followed, and then in the one after that. As mentioned then, and to reiterate again, selling while at lows can be disadvantageous for a number of reasons.

Primary of which is the fact that you may end up selling a bottom as an oversold market rockets higher, even with the longer-term downtrend still intact. So, just because the trend is really attractive, and even though there is every fundamental reason in the world for this to continue lower, that doesn’t mean that ‘hope’ is an adequate trading strategy. Instead, trade the plan.

For those looking to press the move lower in Gold prices, traders can look for resistance to come in at a threshold of previous support. Just as we looked at in our last article, these prior support levels can become new resistance levels that can be helpful for additional entries. Since a new low was barely set earlier in the trading day, traders would likely want to cast those levels a little deeper in previous price action, using a similar stance as we had investigated in our last article. Re-entries can be sought out at prior price action swing-lows of $1,063.84, $1,071.28 and then $1,087.05. Stops can be placed above the higher swing on the chart, with targets cast towards today’s low of $1,050.50, and then $1,038.60, which is the 27.2% extension of the most recent major move.

With the next two trading days full of high-importance data, traders may be able to wait around to get a significantly better short-entry in Gold, particularly if USD-weakness comes in on the back of Non-Farm Payrolls. 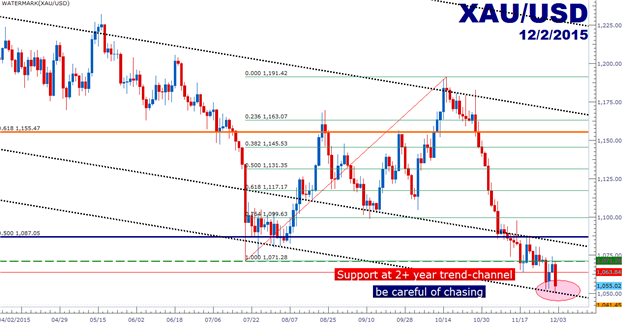