For an intermediate-term fundamental and technical viewpoint, see the Q3 Gold Forecast.

Gold pullback may deepen, but constructive so far

Last week, gold ran into major long-term resistance by way of lows created following the 2011 spike-high, and the volatile price action last Tuesday cemented the bottom of the 1522/75 zone as a legitimate ceiling.

The decline so far has been subtle with little to no change since a week ago, a bullish development thus far. Gradual, stubborn declines following sharp run-ups into resistance are considered a good thing; it shows buying interest even at a hint of weakness.

This doesn’t mean something won’t further spur gold along to the downside, but as long as it doesn’t turn outright aggressive, then weakness will be treated only as a correction within an ongoing bull-move that began since the wedge-breakout in June.

A good spot for would-be longs is the trend-line running up from late May in the vicinity of 1450/60. A decline and hold there would offer enough room back up to the resistance zone for a good risk/reward swing-trade with potential to turn it into something much larger if a breakout above 1575 were to develop.

For now, gold is still close to a major zone of resistance and at risk of correcting further or at least moving sideways for a bit longer. This takes some shine off of fresh longs, but doesn’t invoke much confidence in shorts given the generally strong nature of gold. 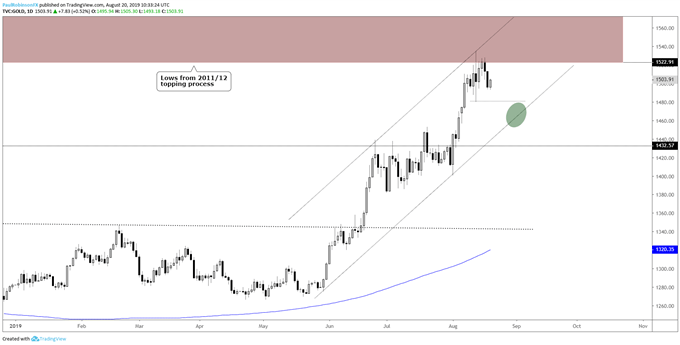 Silver price action is similar to gold, constructive so far despite last Tuesday’s volatile session. There is good support by way of a couple of directions. There is the 2003 trend-line that once acted as resistance, then there is the trend-line from July rising up near current levels. Sideways price action has silver looking like it wants to maintain and build on the rally that began at the end of May.