See what fundamental drivers and technical signposts our team of analysts are watching in the DailyFX Q2 Gold Forecast.

On Thursday, gold reversed higher from last month’s low and following a failed attempt to break the trend-line running over from January. So far, this has led to modest short-term strength and could lead to a bit more in the days ahead.

Looking higher, the first line of resistance doesn’t clock in until the t-line off the Feb high that runs down over last month’s high. Depending on the timing of a run-in with the downward sloping line of resistance, gold may trade up another $10-15 before struggling again.

Should the bounce fizzle before the, the threshold to watch on the downside is 1281, the low from Thursday and March. A break through there is seen as likely to lead to the trend-line off the August low or worse. 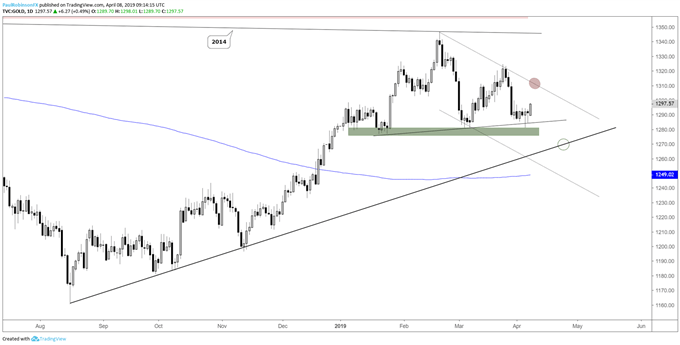 Silver is holding into several angles of support: March low, the 200-day MA, and the top of a range from last year. Just a hair below Thursday’s reversal lies the neckline of the head-and-shoulders pattern dating back to January.

Indeed, a big area from around 15 down to 14.70-ish, which if broken would validate the H&S top. But until we see a confirmed break support is to be respected. There is trend-line resistance just ahead from the February high and underside of the line from November.

The alternative scenario to the H&S formation is for the price sequence to further along and develop a mature descending wedge. This pattern would consist of the neckline and the trend-line from the February high. A break of the top-side trend-line may set in motion a squeeze. Right now, it is viewed as the lower probability scenario, but one worth taking into consideration as support continues to hold.