The reversal in gold last week has quickly come to a grinding halt, with the past few days sporting very little activity. That looks set to change perhaps as soon as today, and on that may come a testing of the important November trend-line/lower parallel.

After getting rejected from around long-term resistance, holding the Nov trend-line will be important as a break could lead to a pick up in selling. The trend-line has numerous inflection points also adding weight to its importance. One of these times it may not hold, but until it doesn’t it is viewed as support.

A move higher doesn’t leave a lot of room for a good long trade with resistance not far ahead. One scenario that may offer up some ‘juice’, is for a bounce off the trend-line then lower-high and break of the trend-line, furthering along last week’s key reversal. For now, though, in ‘wait-and-see’ mode.

Silver’s outlook is even worse on the upside, due to it not only lagging gold but also have a good deal of resistance by way of several trend-lines: 2003, July 2016, and April 2017 t-lines all run in the same vicinity. Keeping it supported trend-lines from December and last month, but both aren’t off the highest quality given the number of touch points. A break of these, though, will further validate resistance, and if gold fails to hold the November trend-line – selling could pick up quickly for this long-time laggard. 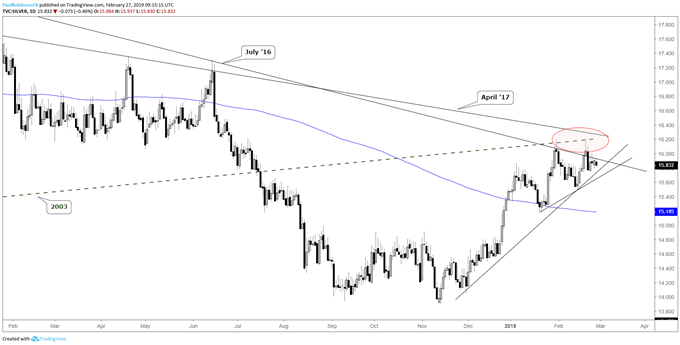