For forecasts, trade ideas, and educational guides for all levels of experience, see the DailyFX Trading Guides page.

Yesterday, the more hawkish than expected outcome from the FOMC meeting caused a reversal in gold after it traded to its best levels since July. While the high of the day was above the 200-day the close was not, making the moving average a hurdle to cross.

There is a solid bullish channel in place since November and so despite the key-reversal showing force there is still a positive tone in gold. A break below the lower parallel will quickly change that and have the trend-line (lower parallel of a large bear-flag) from August in view.

This would be a very important threshold to hold if the trend off the August low is to maintain, otherwise another big leg lower could kick off. For now, caution is warranted given yesterday’s forceful turnabout, but so long as the Nov-curent channel is maintained there isn’t reason yet to turn aggressively bearish.

On the top-side, should we see a close above the high yesterday at 1258, then the upper parallel from November and summer time will come into play as resistance.

Gold traders are collectively holding a large long position, check out IG Client Sentiment for details as to how this may be a headwind for the precious metal. 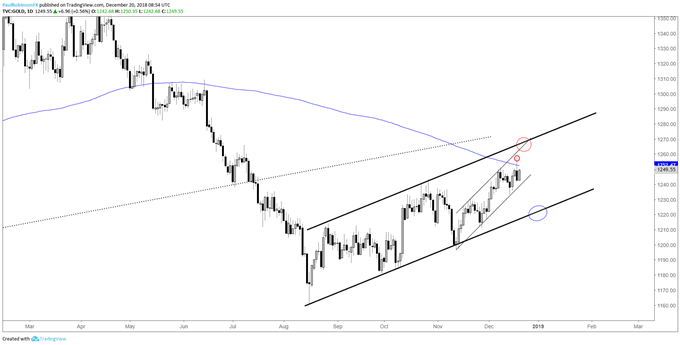 The key-reversal in silver came at a level of resistance that has been tested numerous times since October. As long as the precious metal stays below 14.91 the burden of proof is on bulls to be able to push it through.

A turn lower will have the lower parallel from November in focus as support, and if that were to fail to hold then a return to the low-end of the September to current range would likely be in store, or worse.