Check out the intermediate-term fundamental and technical outlook in the Q4 Gold Forecast.

Gold finally broke down from the range it had been in for almost the entire month of September, and on that we initially looked for lower prices to follow, however; it was noted that it could be a fake-out breakdown which results in a higher low from August.

With yesterday’s surge back into the range, the outlook is still somewhat murky, but improving as the higher lower and rally scenario start to gain traction. The top-side isn’t without its obstacles, though, and if gold is to make good on the jab lower and reverse, then it will need to break the Aug 28 high at 1214. A break of this important swing point will have all recent highs and trend-lines cleared for a leg higher.

But should gold once again find opposition upon arrival of resistance, then we’ll have to continue with a neutral to bearish bias. Gold isn’t easy to figure out these days with choppy trading conditions dominating, but it’s encouraging that after last month’s unusually tight range we are already seeing things free up a bit. This means we may soon get a good feel for what is going on in this market.

Gold traders remain heavily long, check out IG Client Sentiment for details as to how it can be used in your trading. 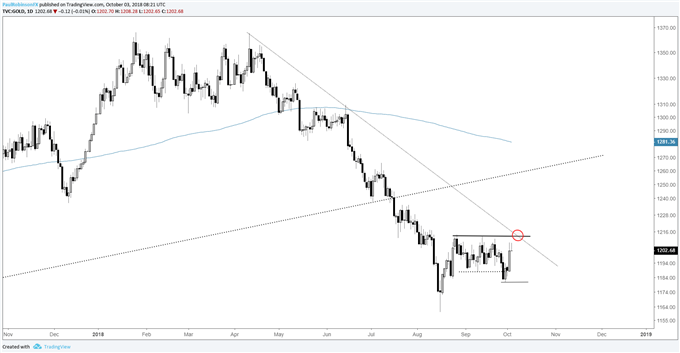 Silver is starting to lead gold in performance, something it hasn’t done in a while. But the price action is very whippy and makes it even more difficult than gold. There is some resistance ahead around 15 to contend with. A pullback from there may help forge out a higher low from which to operate with, but for now risk/reward is generally lacking.