For an in-depth intermediate-term technical and fundamental outlook, check out the Q3 Gold Forecast.

Another round of consolidation has led gold to another round of selling, this time pushing price below a swing low from July of last year, and, at the time of this writing, below a pivot from March of last year as well. One more minor level at 1181 exists before gold is on its own until the 1120s if it is to bounce from price support.

The issue in the past month with respect to support, has been the fact that there has been little in the way of price action which has suggested the decline is ending despite at times market conditions becoming oversold.

Sentiment is starting to reach an extreme in the futures market where, according to DSI (Daily Sentiment Index – a futures-based indicator), only 6% of market participants are bullish. Single-digit extremes aren’t all that common and suggest the market could at the least be nearing an inflection point.

But, it comes back to price action. The table is set for a bounce from a market positioning standpoint (we’ve seen heavy selling in the CoT report to back up sentiment figures), however; price action needs to show some kind of bullish response to oversold conditions.

Gold traders remain steadfast on their longs by a count of 6-1 over shorts; check out IG Client Sentiment for details as to why this has been a good contrarian indicator.

If we see some type of swift flush and reverse, strong turnabout from current levels, or a bullish short-term reversal pattern (i.e. – inverse head-and-shoulders), a long may be warranted for those who like to look for countertrend trades.

As discussed in last week’s webinar on trading pullbacks, ideally, to trade a countertrend reversal we first see a pop off the lows followed up by a solid higher low developing after another attempt to dive back lower. This at least gives a fighting chance and logical set-up versus buying into the teeth of a strong decline.

For those who have been short, utilizing a trailing stop strategy of some type at this point is a prudent play. Gold could certainly continue lower, but risk is rising of a reversal. Fresh shorts at this juncture aren’t very appealing from a risk/reward perspective.

Last week, we took a liking to silver from the short-side given the descending wedge on the 4-hr time-frame. Now that silver has put in another down-leg, fresh shorts aren’t favored any longer. Existing shorts can use a trailing stop strategy to try and extend the trade, while would-be longs look best served being patient in waiting for proper price action.

Silver has potential to get wild as it is known during times of strong trends to suddenly spike as liquidity becomes an issue. With that said, be on the watch-out for such price action, as it can also be a good marker for a final flush before reversing.

Looking to support, there is a lower trend-line in the current vicinity which dates back to June 2016, with a more conservatively drawn line about 40-cents below there. As far as strong price support goes, there is nothing until the December 2016 low around 13.60. 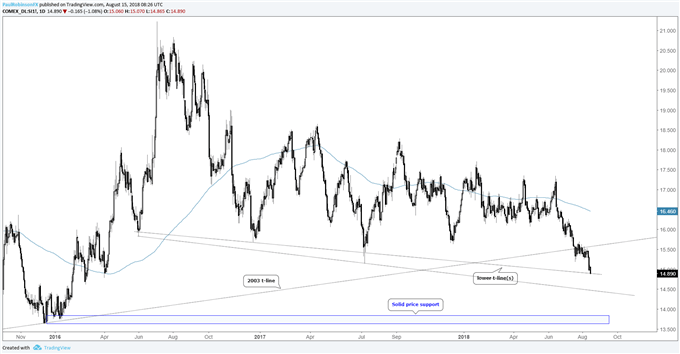