To see how traders are positioned in major markets & currency pairs and what it could mean, visit the IG Client Sentiment page.

Silver is undergoing a bounce nearly as strong as the sell-off which proceeded it. During the sell-off we saw record-setting changes in the CoT report, with speculative longs liquidating at a furious pace. In the latest CoT report, there was some residual selling which brought the net number of contracts (+2,469) held long by large speculators to its lowest level since June 2014 (+766). In recent years, any time their net-long position neared the zero-bound, silver experienced a multi-week rally.

The outlook during the sell-off and initial portion of the current bounce was maintained as such: Trade down to the 2003 trend-line, and given the ‘panic-style’ selling in the futures market, we could have an optimal combination of oversold conditions into major long-term support. But for the second time this year the 2003 trend-line remained untouched. As we head into 2018, if silver sinks to trend support and futures market positioning remains near the zero-bound, or even turns negative, we could still see that ideal combination.

Another scenario to watch for, which may involve missing out on the 2003 trend-line, is the development of a wedge just above it. Price action has been coiling up since January 2016. This could mean a little more time before a breakout takes shape, but given the proximity of the apex it shouldn’t be much beyond March before doing so. The implications of a breakout (in either direction) could be big as the coiling pattern is quite large and likely to lead to a sustained move. Taking the market positioning profile into account, a rally looks likely to offer the most amount of momentum as speculators jump back aboard.

For now, it looks like we may see the bounce further itself. However, we’ll maintain a neutral outlook until the calendar flips with greater market participation and we perhaps gain better clarity on one of the above outlined scenarios. The two scenarios will be similar in terms of the pattern developed (breakout direction pending), it's just a question of whether or not we'll first see a thorough test of the 2003 trend-line. 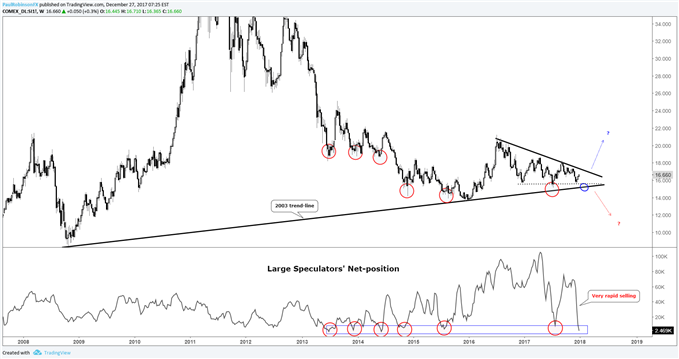