To see how retail traders are positioned and what it could mean, visit the IG Client Sentiment page.

Silver continues to be quite weak and positioned for lower prices as the year quickly draws to a close. The damage has been done, and it appears silver will need to find meaningful support before it can attempt to turn around. Down around 15.19/15 lies long-term support by way of a trend-line rising up from 2003 (passes under ’08, ’15, and very near the July low). In confluence with this long-term slope is the July 10 low (the July 9 low was omitted by the COMEX exchange due to erroneous pricing). It’s not that far on a long-term basis, but does provide room for short-term traders to still look for more weakness.

Silver is a bit overdone here and may find a relief bounce before heading lower. This could commence off the lower parallel tied to the trend-line extending down from the September peak. The first level of resistance in view clocks in around 16.14, but given how strong momentum has been it may find it difficult to find bids even up to that level. But should a bounce develop that far and then stall, it would offer an attractive spot to enter from the short-side, with long-term support in mind as a target. 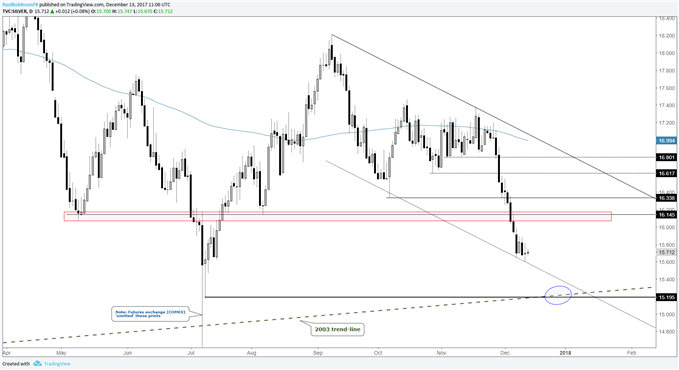 Gold is hanging out below a couple of levels of interest should we see a counter-trend rally. Roughly 1251 and 1261 are both prior swing-lows which we’ll look to as resistance, especially the latter given it is the bottom of the congestion which took shape before the swoon. Support is targeted between ~1220/05, where trend-lines lie dating back to January of this year and December of 2015, respectively. 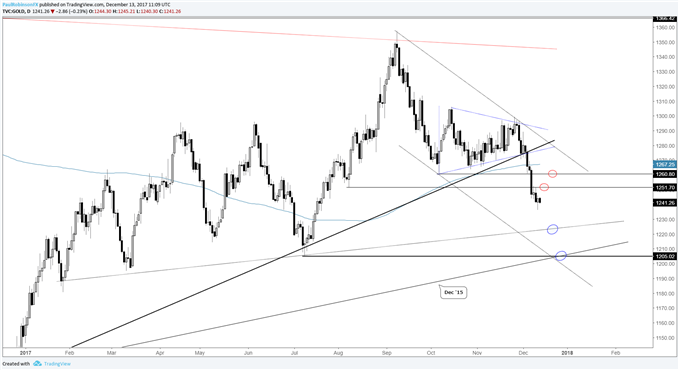