Silver has been getting rocked for over a week now following the breakdown out of a symmetrical triangle and decline below the July trend-line. There were minor levels of support we were been watching, but buyers were scarce as price has moved from one level to the next. A move into the mid-15s or worse (July low – 15.19, 2003-current trend-line) could soon develop on a clean break of 16, and with gold looking to have started a new leg lower this becomes an increasingly likely outcome. There may be a bounce or two along the way, but barring an extremely sharp turnaround, those should be short-lived. Resistance first clocks in at the October low of 16.34. 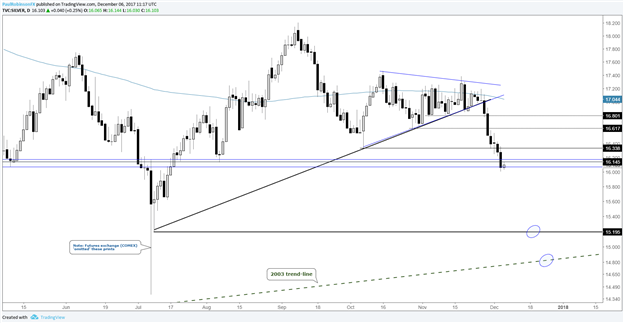 Gold stubbornly held in for a while, but finally succumbed to selling pressure yesterday and as a result it broke the one-year trend-line. Yesterday’s hit also took it outside of a nearly matured wedge. The pattern wasn’t as ‘pretty’ as the one formed by silver, but nevertheless the entanglement that gold has been caught in looks headed for the rear-view mirror. Once firmly below 1261 there isn’t a lot to the left on the chart in the form of support. Minor support around 1251, but after that you have to start looking towards the 1220/05 region to find more meaningful levels. The trend-line from February and then there is the July low. To turn the picture around, we need to see a firm recapturing of the December trend-line, and really things don’t shape up for longs until solid clearance back above 1300. 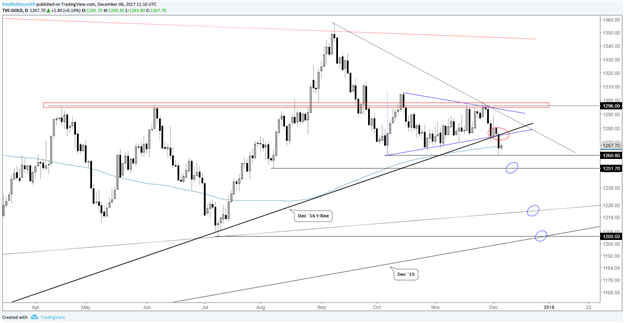 Platinum is currently breaking an important trend-line extending higher from the January 2016 low, and on that it threatens to take out levels extending back to December of last year. A break of those levels and things could get ugly fast, with nothing in sight until the 2008 trend-line and Jan ’16 low at 811. 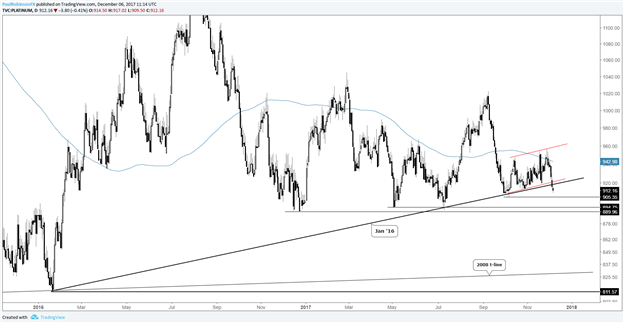 To receive Paul’s analysis directly via email - SIGN UP HERE