Silver & Gold on Divergent Paths, Can Only Trade What’s in Front of Us

See what is expected to drive Gold & Silver as the year concludes in the DailyFX Trading Forecasts.

For the past six weeks silver has been chopping sideways, coiling itself into a symmetrical triangle. That appears to have ended with yesterday’s move lower. Not only has silver moved outside of the pattern, but it broke the July trend-line. There is a little horizontal support right around the 16.77/80 area, from which a small overnight/morning bounce is currently taking shape from. If weakness is to set in as the pattern and trend-line break indicate, minor support shouldn’t last long. This will bring 16.61 into play, but the next pivotal level viewed as significant is the October low at 16.34. The size of the formation (height) suggests a move to below 16 is in the cards. Another key price level before that can be achieved is around 16.15, a pair of key lows from earlier in the year. Negating yesterday’s breakdown will take a convincing move back into the low-17s, until then silver looks headed ready to roll downhill.

Gold has held up much better than silver, instead of breaking support it is actually attempting to break above the 1300 barrier. The divergence in strength between the two precious metals isn’t something we haven’t seen before, and in fact for short periods of time in the past they have traded in opposite directions of one-another (albeit usually very briefly). A closing daily bar above 1300 will bode well and have 1306/13 in focus as the only obstacles standing in the way of a larger run. But if gold turns lower from resistance very soon, the December trend-line and underside of a developing triangle will come into focus. A break below the December trend-line would likely have silver really rolling downhill and gold just starting to do-so itself.

Struggling right now, or perhaps you just want to learn more about trading psychology? Check out this guide – Building Confidence in Trading. 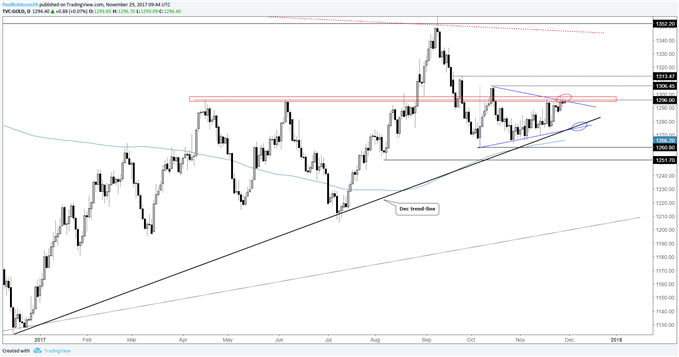 The bottom line is this: We can only trade what is in front of us, and in keeping it simple we should run with the technical developments presented. Silver is the one to ‘pick on’ from the short-side as long as the technical break holds; while gold, if it experiences a breakout, is the preferred long candidate. For ‘would-be’ sellers against a strong level of resistance, gold is there now.