Silver & Gold Prices at Risk of Reverting Back Lower

What will drive Precious Metals this quarter? Check out our Q4 Forecast for our outlook.

When we last looked at precious metals the conclusion was lower before higher; and while that was true on an intra-day basis, it wasn’t exactly what we had in mind. It’s been a nice bounce in the sector the past few days with the help of dollar weakness, but are we on the verge of seeing another dive lower towards substantial support levels?

First, we’ll take a look at silver. It’s currently trading around a confluence of resistance via the combination of the 200-day MA and a horizontal price zone (low-17s) dating back to August but more recently late last month. Renewed weakness will bring our attention on the recent swing-low at 16.34, with the area of most significance not arriving until 16.07/13. A breakout above resistance won’t necessarily turn the picture bullish, but would be a start. 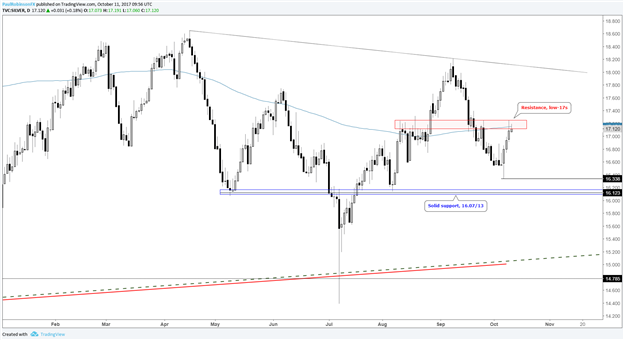 The thought we had last week was for gold to continue to weaken a bit more into a key area of support by way of the 200-day MA, trend-line off the December low, and a minor swing-low created in August. This turned out to not be the case, and so it was the bounce into yesterday led gold up to very near resistance in the 1296/300 vicinity. It’s a fairly substantial area given the double-tops from April/June and the initial failure witnessed around there during August. On a turn lower, we’re still eyeing the December trend-line and 200-day MA, with the possibility (depending on the timing) of Friday’s low also aligning with those two levels. 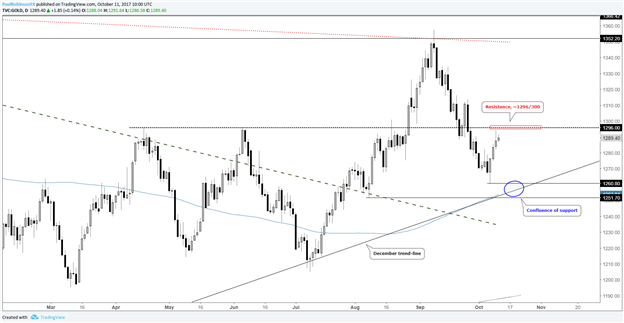 Volatility heads up: Later today, the FOMC minutes from the September meeting are due out at 18:00 GMT time, and while it isn’t expected to be a big deal we can never dismiss the possibility that a good amount of volatility won’t spawn from it.