Find out what fundamental factors are driving Gold & Silver in our Q3 Forecast.

The last time we discussed silver prices, we were looking at the rising channel and keeping an eye out on how gold handles itself now that it had crossed the widely-watched 2011 trend-line. Silver continues to maintain the rising channel (gold too) and despite last week’s key reversal-day we’ll continue to respect the lower parallel for as long as it holds. There has been a lot of ‘play’ around the 200-day MA, with several days failing to close above (only twice it has, fractionally) during the past couple of weeks. We are definitely seeing this moving average exert its influence. If silver can free itself from the 200-day, a break to the 8/18 high at 17.32 can unfold, which depending on the timing may be in confluence with the trend-line running down off the July 2016 high. 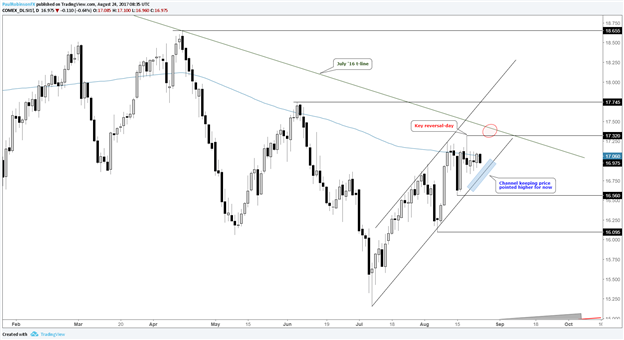 Gold crossed the long-standing 2011 trend-line on a weekly closing basis not long ago, which helped further bolster the bullish case. But it still has work to do. The double-top from the spring is presenting problems; a solid key reversal-day bar was formed on 8/18 on an attempt to break above and also clear into the 1300s. The rejection has put the advance on ice for now. Like silver, gold has a clean rising channel (actually it’s cleaner) which is keeping it guided higher. Between resistance and support both close at hand, we have a situation where one side of the market is poised to ‘win’. A clean close above 1300 and the reversal-day high would clear a path towards higher prices, and with that bring silver along for the ride. 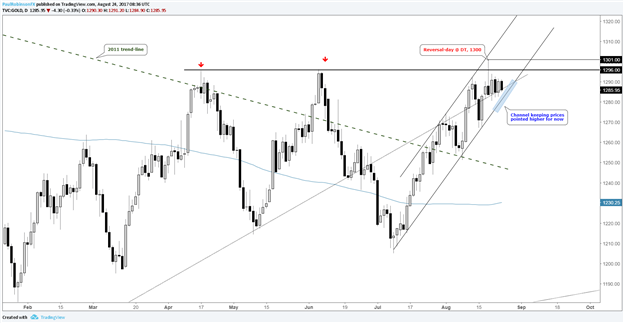 The key event of the week comes tomorrow when Fed Chairwoman Janet Yellen speaks at 14:00 GMT time in Jackson Hole. It’s certainly possible she moves the market materially, but it could also turn out to be a non-event. With that said, traders should be prepared either way.

Check out our new guide! – Building Confidence in Trading