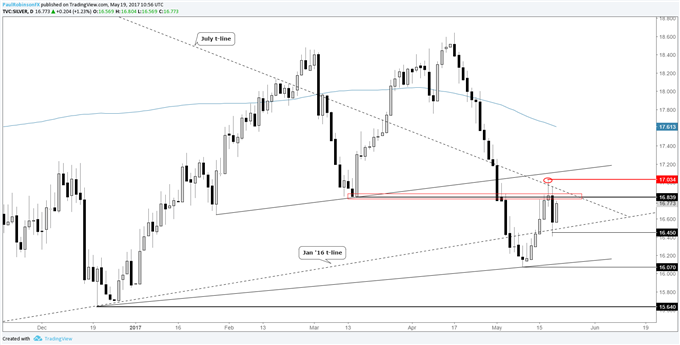 Find out what’s driving precious metals in our market forecasts.

On Wednesday, we were looking at silver as it was pressing higher into resistance in the form of the March low and underside of the July trendline. One last push higher took shape the other day before putting in a reversal bar and closing right around the March low. It was an event we were looking for, but before turning bearish we also wanted to see a clean undercut of the rising channel off the monthly low, which we got yesterday. The move lower was aggressive, but the picture could get muddled a bit from here.

But as long as silver remains below resistance up to 17.03 a bearish bias will remain intact. The January trend-line which was breached and overcome earlier this month was roughly where yesterday’s low was, and so we’ll keep an eye on that as possible support, but it’s not viewed as a significant source of demand. Looking below yesterday’s low at 16.41 the next level of support comes in at the December trend-line, which arrives not far above the monthly low at 16.07.

All-in-all, the stage is set for lower prices, however; US dollar weakness, if pervasive enough, could be the fly in the ointment for shorts should precious metals wake up and once again resume an inverse correlation with any kind of strength. We’re not going to worry about it too much until it actually matters, which lately it hasn’t. Getting back to silver on its own, as said earlier, as long as resistance isn’t overcome we’ll continue to remain in the bear-camp. A move towards the December low at 15.64 could be in store in the coming weeks.