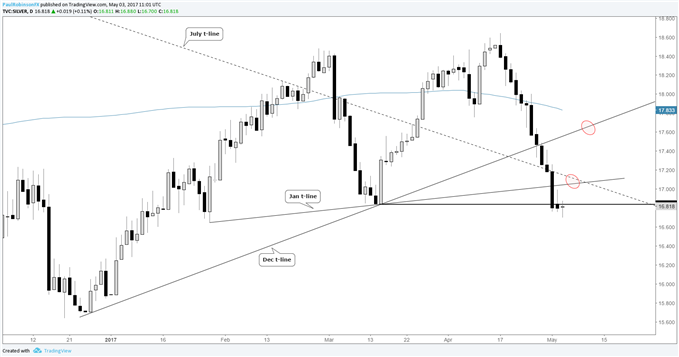 The nasty streak of losses continues for silver prices, extending it to twelve consecutive down days as of yesterday. Ouch. A string of losses, or gains for that matter, is not an indication a run must end, nor does the magnitude of a price move act as a great signpost (silver has dropped over 10% the past 2+ weeks). But it does provide caution for those looking to chase the market lower, or those who want to protect profits. A bounce is due, and given the way in which this precious metal in particular trades, it could be rather sizable.

Ideally, a hold of the March low or a piercing candle through the low with a close above would have taken place to present an opportunity for those would-be longs looking to play a bounce. But that has not been the case. The March low of 16.80 was undercut each of the past three days. It’s not a big breach, but it has helped further take what was once looking like a bullish picture and turned it upside down.

The thinking on this end is that whatever type of bounce unfolds will be just be that – a bounce. Not the beginnings of a new leg higher, but rather a sellable rally down the road. Looking higher, the first line of resistance comes in not far above at the broken January trend-line and test of the July trend-line; beyond there a retest of the broken December trend-line is the bigger area of interest. If silver can manage to climb back to that point and work off oversold conditions, a rejection from the trend-line could present an intriguing opportunity to short.

For a longer-term view on precious metals, or another market of interest, see our quarterly forecast.

For now, though, silver is oversold, and could become more oversold; but at some point soon it is likely to mount a recovery of some type. Whether it’s sharp or not could also be telling. If silver were to put in a feeble recovery and wobble sideways for a period of time then it would indicate a market that wants to continue lower.