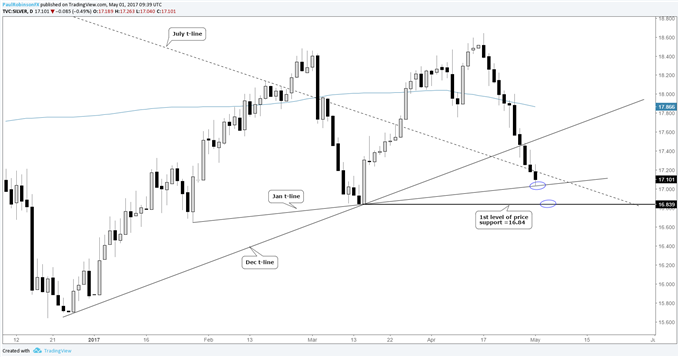 Silver Price in Search of Support Amidst Nasty Streak of Losses

Is the early-year rally in precious metals over? See our analyst forecast for details on what’s driving the market.

Precious metals continue to weaken, especially the price of silver which has declined ten consecutive days not counting today, and while consecutive days alone isn’t a reason to become bullish, a drop of roughly 8% in a relatively short period of time does suggest the metal is oversold. Conditions are ripening towards a relief bounce at the least, but we need more than a large drop and a streak to justify looking for a bounce.

A recap of prior support we were watching as possible points of buying interest: The December trend-line broke on Thursday and to end the week a bounce from a backside test of the July trend-line failed. Now, silver is probing lower towards the March swing low at 16.84. Can that hold if hit? The other two technical events were trend-lines, with the latter (July trend-line) viewed as a weak form of support given it is in the direction of the trend, but silver is now finally coming up on good old fashioned price support. There is one more trend-line connecting a swing-low in January to the March low which could hold, but the preferred level to reach is the actual March low at 16.84.

It's only support if the market treats it as such. An obvious but not-so-obvious statement. Silver may touch support, but will we see signs of buying interest arrive, or will sellers continue to keep momentum intact as it has? The reaction to our levels is the tell, and so far, we’ve had no bullish price action – i.e. candlesticks which indicate the current trend is exhausted, at least temporarily, such as a bullish key reversal bar (‘pin’ bar), bullish engulfing, etc.

Once we see some form of support bring in buying interest – whether it be the January trend-line, or the March low – we’ll be inclined to look for an oversold rally, at the least, to unfold.