Is the precious metals rally over? See what’s driving the market!

On Wednesday, when we last looked at silver price action we said our bias was largely hinging on how gold was reacting from the 2011 trend-line, and then it’s subsequent response to nearby support. Gold is holding support around the 1260 mark, while silver on the other hand broke support by way of the December trend-line.

The next level of potential support we were turning to on a break of the multi-month trend-line was the backside of the July to current trend-line. Silver hit it yesterday. So far today, we are seeing buyers step in and keep it supported. The July t-line isn’t viewed as the strongest form of support, but if it can hold a bid there then it will strengthen its presence. With a little more to the upside it won’t be long, though, before we could see silver make its first attempt to recapture the December trend-line. That could be problematic.

Silver is oversold after declining for nearly two weeks straight, a bounce was due. How much steam it can gain from here will be telling as to whether it's simply an oversold bounce, or the beginning of a stronger push higher. A recapture of the December trend-line is the first challenge. A touch and turn lower might mean silver wants to continue to sink towards 16.84. 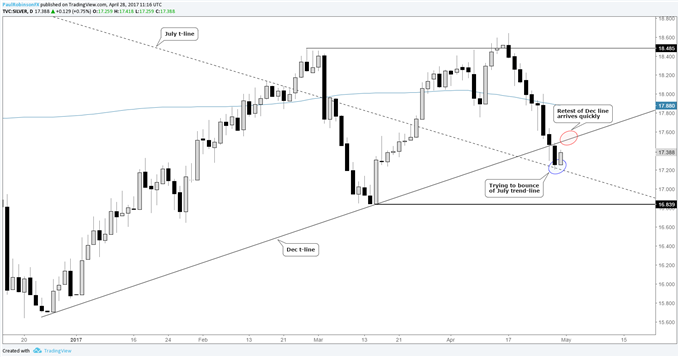 The US dollar has been supportive for higher prices, but it hasn’t mattered to the precious metals complex. The US Dollar Index (DXY) isn’t looking very healthy, and as we discussed in this morning’s webinar (sign up here for the next session), a strong push lower in the dollar might help give gold and silver the needed boost to rally. But we aren’t putting a lot of stock right now in that relationship given it isn’t a strong one. We’ll continue to focus on those two markets separately until clarity in the correlation comes back into focus. 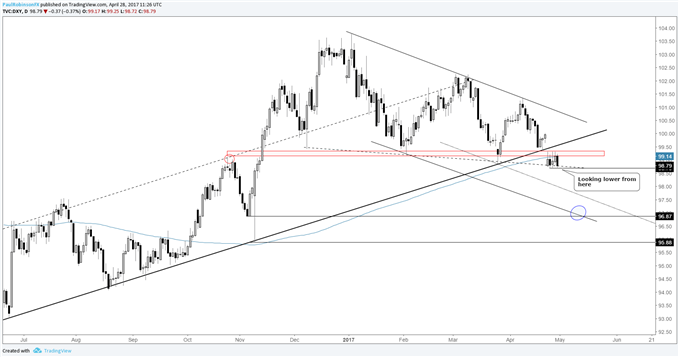 For now, silver is caught between two lines and how it responds to either in the coming days could be the tell as to whether to expect a recovery to gain traction, or to start thinking about the next downside support level at 16.84 as the next stopping point.