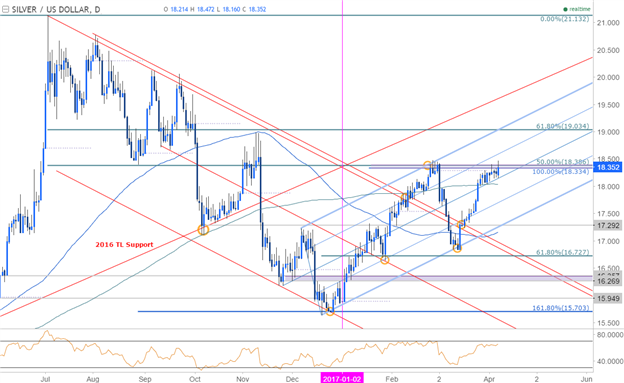 Silver prices have continued to struggle at a key Fibonacci confluence at 18.33/39 where the 100% extension of the December advance converges on the 50% retracement of the decline off the 2016 high. Keep in mind that this region is also defined by the 2017 yearly opening-range highs and if compromised, would reinforce the broader bullish outlook.

The precious metal continues to trade within the confines of an ascending pitchfork formation extending off the November / December lows with the median-line offering support this week. An outside-day reversal candle today at the highs may be an indication of near-term exhaustion for the silver rally heading into the close of the week, but the broader focus remains weighted to the topside while within this formation. 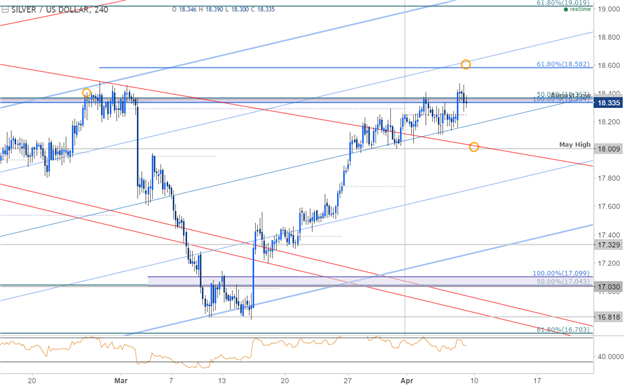 A closer look at price action highlights ongoing momentum divergence into these highs with price attempting to breach the February highs earlier today. We’d need to see a weekly close above this threshold to validate a breakout with the immediate long-bias at risk while below. A break below the 200-day moving average / May high at 18.00/04 would be needed to mark a near-term correction lower in prices. That said, a breach above this threshold targeting subsequent topside targets at 18.58/60 backed by the key 61.8% retracement at 19.02. Note that both the daily & intraday momentum profiles remain constructive for now & we’ll be looking for a marked break sub-50 to suggest a more meaningful turn is underway.