Silver Prices: Much to Be Learned in a Retracement

On Wednesday, we noted a confluence of support in the upper 17s which consisted of the trend-line running up from January, horizontal peaks running back to May 2015, as well as a lower parallel extending back to early July.

This is what we had to say regarding support in our last post:“Solid confluence doesn’t mean it will hold, though, but does present another important inflection point. The move looks overdone in the short-run, but the velocity at which the break happened and the resulting big, bad daily bar created suggests support may not hold for long.”

And so it was, support only held momentarily. Wednesday, silver attempted to bounce, but buyers were unsuccessful in their efforts. The feeble bounce led to a key break of support into our next noted level of support around 17.12, tagging it almost to the exact penny (yesterday’s low was 17.118).

Today, prior to the monthly US jobs report, we are seeing an attempt to bounce from support, but expectations of a bounce to develop far beyond the upper 17s are low without first seeing another attempt by the market to push it lower. Should a bounce develop into prior support turned resistance and silver loses momentum, traders may look to use this as an opportunity for entering short.

A period of consolidation (choppy trading) is a scenario we must consider given the precipitous drop experienced the last couple of weeks. If silver fails to carve out anything resembling a flush-out low and moves sideways for a period of time, it would be a sign buyers are unwilling to step in at these prices and signal that the metal is likely resting for another shove lower. Trade below the 17.12 support level clears a path towards an inflection zone surrounding 16. 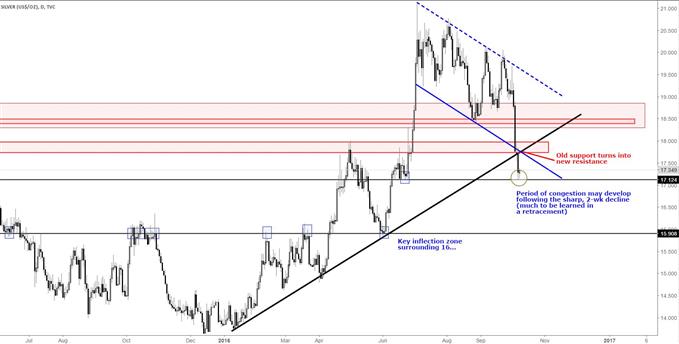 For now, we will wait see how silver responds to the current decline, as chasing after a sharp decline into support is more often than not a losing proposition. In these situations, it’s best to wait and see how the market responds following such a drastic move. As ‘they’ say, “there is much to be learned in the retracement.”

Heads up: At 12:30 GMT, the US jobs report is due out. The NFP figure for September is expected at 172k while the unemployment rate remains even at 4.9% and an uptick in average hourly earnings to 2.6% YoY from 2.4% YoY.

Check out our Q4 forecasts as well as other trading guides aimed at traders of all experience levels.