Silver Prices Melt into Confluence of Support, but Can It Hold?

Yesterday, the price of silver was smashed to the tune of over 5% (largest drop since 1/29/15), along with gold melting below the critical 1300 level. In Tuesday’s post this is what we had to say regarding the precarious position gold was in and ultimately silver:

“Gold needs to soon turn up if momentum isn’t to kick in to the downside. A break of both the trend-line and 1300 level could spell significant trouble. If this is the case, then silver will likely find it difficult to hang onto the 2013 – present support zone, and could quickly trade down to the December trend-line.”

Indeed, gold took out 1300, with a vengeance, and silver in one fell swoop dropped right into the trend-line which developed after the December lows. While the move to the trend-line with velocity was not unexpected, the time it took – measured in hours – was much less than anticipated.

There is confluence of support here at the trend-line, with peaks in place created as far back as May 2015 along with a lower parallel. Solid confluence doesn’t mean it will hold, though, but does present another important inflection point. The move looks overdone in the short-run, but the velocity at which the break happened and the resulting big, bad daily bar created suggests support may not hold for long.

We will need to see strong price action at this point, and soon, to indicate the move lower washed out the longs and could turn higher. From where we sit, until then it will be tough to own silver, even if at a key area of support. However, aggressive traders looking to scoop silver up could use the confluence of support as the 'line-in-the-sand' by placing stops below.

A solid bounce off support will put the metal up against resistance starting around 18.40 (8/29 low), where we would need to assess whether it is sellable or not by how silver reacts upon a retest of old support turned new resistance. A weak bounce and break below our noted confluence of support will put focus on the area around 17.12 (swing level from June), and if market participants turn really aggressive a push towards 15.90 could take shape. 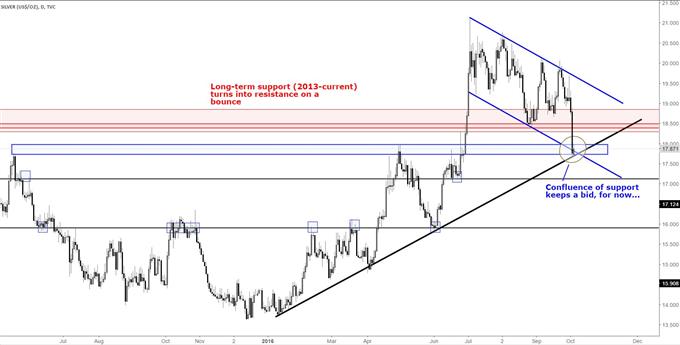 Check out our Q4 forecasts, as well as other trading guides aimed at helping traders of all experience levels.