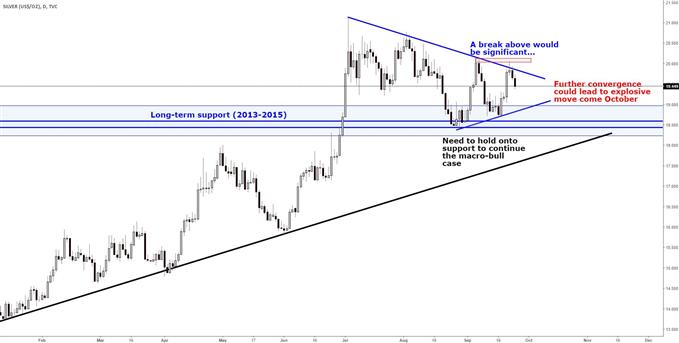 To receive Paul’s analysis via email, please sign up here.

Last Thursday, when we last took a look at silver prices we noted it was trading at trend-line resistance off the July spike high, and that for now it would act as resistance until it was able to clear above. Silver attempted to push above the trend-line, but found sellers, putting in a small bearish reversal day. This gave would-be shorts a reason to look for the metal to turn back lower into the ongoing contraction in price action between rising the trend-line off the late-August lows above key long-term support (back to 2013) and the top-side trend-line.

At this juncture, with silver trading within the two converging lines there isn’t a whole lot to take away from the current technical structure for those looking to establish a position with intentions beyond the very near-term. Once free from congestion a sustainable move is likely to ensue.

As long as the lower trend-line and support in the mid-18s holds, then the period in recent weeks looks constructive within the uptrend off the December lows. Further contraction in the range could soon lead to an explosive breakout as we head into October.

Should buyers show up prior to the end of a fully developed triangle and push silver beyond the upper trend-line, then we will turn aggressively bullish. This will likely coincide with gold breaking out of a developing bull-flag, and, more importantly, above the 2011 trend-line we discussed last week. (For more on the macro outlook for gold and silver, check out this commentary.)

A drop lower will need to see silver hold onto the trend-line in place since late August, and at worst hold the lower end of long-term support in the mid to lower 18s. A break below those support levels will begin to significantly diminish the bulls’ case, and leave the December to current trend-line as the last line of defense for buyers.

For now, scalps and quick-flips will be the best approach from where we sit until silver can make a break for it from the developing wedge.

Hone your skills in technical analysis, check out one of free trading guides designed for traders of all experience levels.