In yesterday’s piece we went over the short and medium-term views for silver prices (see here). Today we will look at the metal from a longer-term standpoint from both a price and market positioning perspective (macro-technical).

Looking at price alone, the longer-term trend turned higher back in December, from which time silver began carving out higher highs and higher lows on the weekly chart. The early summer thrust sent silver above a resistance zone etched out between the lower 18s and ~19 level going back as far as 2013.

The backing and filling price action since early July has made trading difficult at times from a swing-trade standpoint, with only the best opportunities left to those willing to operate from very short time-frames. The long-term trader/investor has had to be patient as the market worked off the summer spike and excesses in speculative long positions built up along with it.

Towards the end of August silver found support (18.37) at the lower end of the long-term support zone around the Jan 2015 peak. So far, so good as the metal continues to hold above that level, already putting in a higher low from there with last week’s low at 18.73.

Looking a little closer, price action is in the process of wedging itself up between the top-side trend-line running off the July peak and the more recent lower trend-line rising up off the 8/29 low. With a little more time the contraction in price swings could lead to an explosive situation.

A move below the August low at 18.37 would be a bit of cause for concern for the longs, but not all would be lost as long as either the April high at 17.99 holds and/or the trend-line dating back to December. The uptrend would be under serious pressure should the trend-line break, but for now that is not in the picture so we will continue to focus on the technical developments at hand.

Taking a quick peek at gold: Gold is at a pivotal point right now, with it trying to hold trend support from when it began the bull-move in December, as well hold onto the April 2016 (1303) and January 2015 (1307) peaks. What is holding back gold - the trend-line extending down off the record highs in 2011. It's bumped its head on it three times since early July, a fourth go at it could be the move to push gold above.

A hold of trend support and eventual breakout above the trend-line should set in motion another leg higher for the metal. This would certainly be supportive of higher prices for silver. Should gold fold below the trend-line and 1300, then a more cautious stance will be warranted for precious metals.

From a market positioning standpoint, the silver futures market is still holding a rather large speculative long position, historically speaking, but the extreme has alleviated somewhat since the current pullback began as it did during the spring before silver launched higher into the summer months. So while large, positioning has retreated, and at the end of the day we are most focused on what price behavior tells us of those excesses. 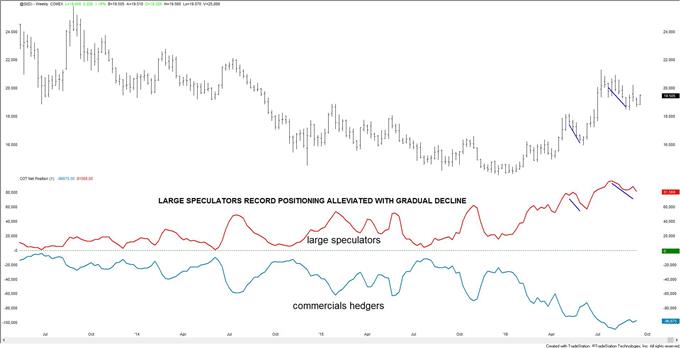 In total, the price chart of silver remains constructive from a big picture standpoint, and while market positioning isn’t the most favorable it has corrected. As long as the low created in recent weeks or the trend-line from December holds, the upward bias in silver does, too. If price action continues to wedge up even further on the daily, the more attractive silver will become for another leg up to commence. In addition to key developments in silver, we want to keep our eye on gold as the two obviously run together.

Head’s up: Today is the FOMC decision on rates (no hike expected) along with policy statement and rate outlook via the ‘dot-plot’.

Start improving your trading today by utilizing one of our many free trading guides.