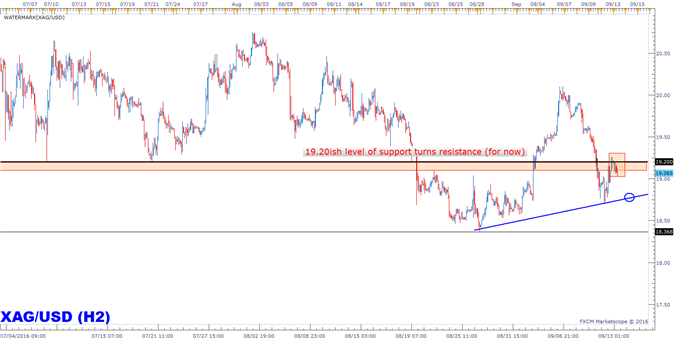 In Thursday’s commentary we noted several levels of support in silver prices, given it had hurdled those levels as resistance in the days prior. The ‘old resistance becomes new support’ rule (and vice versa) is an old one, and over the long-haul a good one. But like anything pertaining to the analysis of markets there are no absolutes, only good rules (and bad) which if emphasized lead to a tradeable edge.

Silver didn’t hold onto those support levels. Each of the short-term levels were quickly broken, even including the most important level of them all at 19.20. Today’s extended rebound from yesterday is thus far finding difficulties in crossing back over the 19.20 area (old support, new resistance). We will use the 19.20 area as resistance until silver clearly crosses back over.

There is minor trend-line support running off the 8/28 low. Some wiggle between the two levels could go some ways toward helping find a good trade in the not-too-distance future.

Clarity when looking back over the past couple of months has been diminished to short periods of time visible on the intra-day time-frames. The daily chart is offering little from which to operate off of at this time. The long-term support zone in the 18s has kept a floor in silver so far, but finding a good sustainable directional play has not been easy. With that in mind, we will continue to focus more on the intra-day time-frames until clarity presents itself.

Follow trader sentiment in real-time via the DailyFX SSI Indicator.