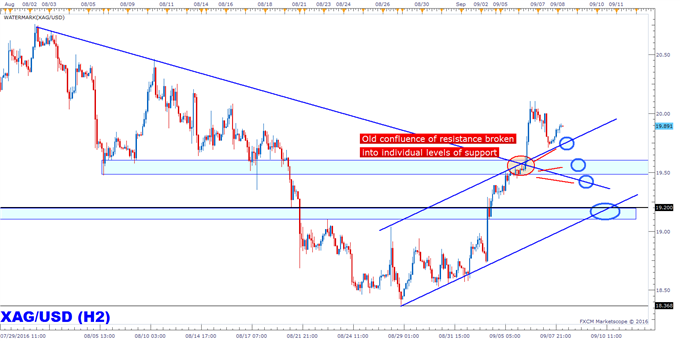 The other day we looked at silver prices while they were sitting up against a confluence of short-term resistance; an inflection point which was quickly broken in the hours after publishing that commentary. The strong push through means those technical events which collided to present a hurdle for silver go from being resistance to support. At this juncture, those events are no longer colliding with one another due to their angling, but on their own each are viewed as levels of support.

Putting the short-term picture into perspective, the recent surge off the late August lows is coming from a pivotal area around 18.50, which was the peak from very early 2015. It is still unclear whether this will have ended the decline and a new leg higher can commence just yet. More is needed from the metal before drawing any concrete conclusions about the big picture.

Silver prices are sitting in the middle of a range which was in place for most of July and a large part of August. As long as support levels can hold, it would be reasonable to conclude a move to the mid to upper-20s, which made up that range, could take shape in the foreseeable future. Gold is looking the better of the two at this time, sitting just shy of the 2011 to current down-trend line. A break above will keep the December to current uptrend continuing; this would certainly be a big positive for silver, obviously. (Watch for a weekly close above ~1360.)

The most significant support level to watch in the short-run is 19.20. It acted as solid support earlier in the summer, and while it didn’t act as key resistance on this current surge higher, is still viewed as a pivotal level when looking at the broader picture.

Ideally, a day or two of consolidation develops to show willingness for silver to hold up after a big run, and to recoil for another jet higher. For now, silver is viewed through a cautiously bullish eye, but should silver slice through support versus a gradual decline and hold of any of those levels, then we will need to consider alternatives.

Keep any eye on the US dollar, as in recent trade it has been a good source of strength for precious metals. A daily close below 11841 in the USDollar will be a key event for the index, likely leading to continued weakness and helping along silver.

Sharpen your skills in technical analysis today and check out one of our free trading guides designed to help traders of all experience levels.