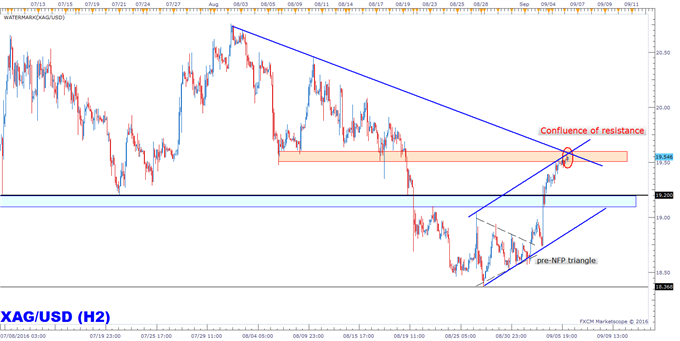 In last Wednesday’s commentary, we took a look at the triangle developing in silver which indicated expansion in volatility was on its way. The downward trend dating back a month suggested a downside break was more likely, but in being consistent with proper execution of triangle patterns we had this to say: “Keep in mind, while the trend is lower and suggestive of a continuation lower out of the triangle, these patterns can break in either direction; triangles are simply contractions in volatility indicative of pending expansion. On that note, it is important to wait for the pattern to develop and break, first, before taking an entry.”

That turned out to be a sound approach (as per usual), as a short position would have turned into an unnecessary loss given no trigger to the downside.

The break above the top-side of the pattern, though, came less than a day away from Friday’s US jobs report, which made entering a long position just prior to a major news event not the most ideal scenario, and further casting a shadow on the trade was the fact that silver was treading just beneath resistance in the 19/19.20 vicinity.

The move higher has silver currently pushed up against a confluence of resistance in the form of horizontal levels extending back nearly a month, a trend-line off the 8/2 peak, and the upper parallel of a channel developing since the recent lows.

Traders looking for a resumption back lower could look take a short position once momentum turns back lower. Those looking to establish a long position will likely be best served waiting for resistance to be overcome, first, or waiting for a pullback to support.

Find out what make characteristics profitable traders have in our free trading guide, “Traits of Successful Traders.”