An excerpt from last Tuesday’s commentary: “From an intermediate to long-term standpoint, we have discussed on several occasions the belief that until record long positioning by large speculators in the futures market corrects with price, we believe silver will find it difficult to move higher.” This was another way of saying the path of least resistance was more favorable for the bears than it was for the bulls, but with light summer trading and range-bound market conditions dominating trade it was tough to be strongly convinced in either direction. 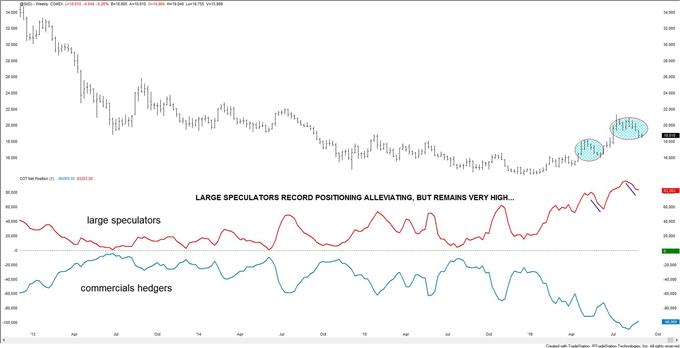 The record extreme in the futures market has begun to alleviate itself along with the decline in the price of silver, however, it does remain at very elevated levels. Will the decline in positioning be enough, or does a further drop need to first be seen before silver can bottom? (If it's to even bottom.) Hard to say just yet, but the price of silver is in an area of support which could turn the picture right-side up if it can hold here shortly. From current levels down to around 18 lies solid horizontal support. Should the market continue to fade lower below this zone, then we will need to turn to the trend-line off the December low. To conclude in regards to market positioning – we will let the price action of silver determine when the market’s position has properly adjusted. 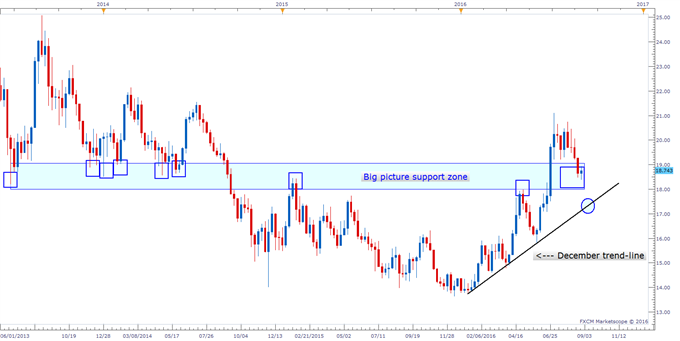 Turning to the short-term time-frames, the sequence of lower highs and lower lows continues, but has begun to lose some momentum in recent trade. The loss in downward momentum is creating a downward channel, which could continue to keep prices pointed lower and lead to another sharp leg lower as longs throw in the towel, or indicate a bullish inflection point. At this time, it is too soon to draw any type of bullish conclusions from the current price sequence. For now, we will run with the bearish trend sequence until further developments, and lean towards a neutral to bearish stance. But at the same time, we will be mindful of the fact silver has dropped into an area of long-term support which may overwhelm any short-term price configurations. A break above the upper parallel will be the first step in seeing higher prices, then a climb above 19.20 will be needed from there. 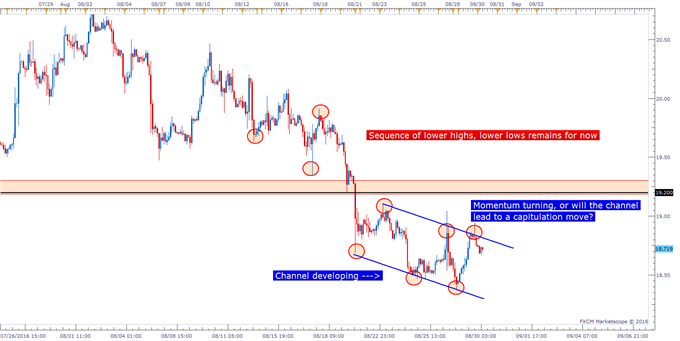