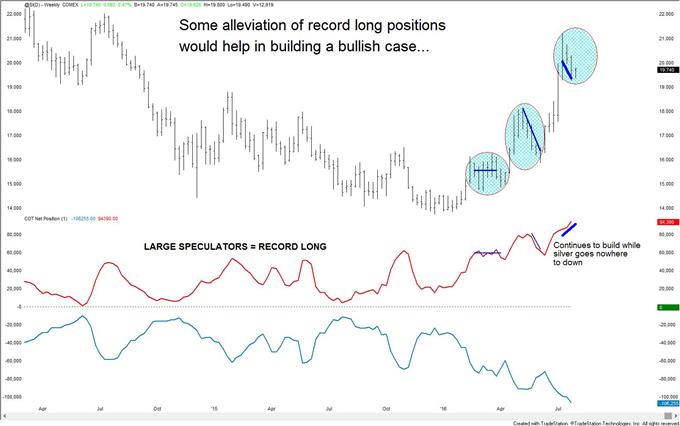 The spike-and-reverse from earlier in the month acted as an exhaustion-move ending the sharp rise beginning from beneath 16 to start the month of June. The decline in silver the past couple of weeks has thus far been relatively benign in the absence of heavy selling outside of an isolated day last week. The net result leaves us wondering if the worst of the decline is over, with support coming in at 19.20. The trend off the lows in December suggests this could be the case.

The continually building in net long exposure by large speculators in the futures market suggests otherwise, though. But this extreme has been suggesting caution for a while now as price action has said otherwise. In any event, a decline in futures positioning along with a decline in the price of silver would invoke more confidence in the recent pullback remaining constructive.

Looking at silver through the lens of an intra-day chart: It has found support twice right around 19.20, however, top-side trend-line resistance is keeping it from making any advances. It is currently testing the trend-line at the time of this writing. With silver stuck between the two we will focus on which one it breaks for short-term guidance. A break above the trend-line at this time appears to open up the most room for a move given the lack of significant horizontal resistance; nothing for about ~$1 from here (~20.66). On the down-side, if 19.20 breaks then support exists quickly thereafter between 19 down into the mid-18s.

The descending trend-line and horizontal support could soon converge, creating a wedge situation. This would be ideal given the explosive moves these patterns can produce.

Today kicks off the two-day FOMC meeting, with tomorrow the rate decision and policy statement. There are no expectations of a change in rates, so as per usual it will be about the language of the statement. It may or may not be a volatility-producing meeting, but in any event we should be prepared.

He can be reached via email at instructor@dailyfx.com