The upshot on Friday came on safe haven flows into precious metals with ‘Brexit’ becoming reality. Those flows didn’t carry over into Monday where more risk aversion took hold of markets, which would be enough to make one think the rebound in risk yesterday would have sent those Friday flows into precious metals in reverse, but that wasn’t the case.

The current trading environment has become less than ideal across most asset classes as market participants digest recent events, making trading decisions difficult without time for new set-ups to develop. With that said, our efforts have shifted to looking at charts from afar until short-term price behavior becomes clearer. (We had an hourly set-up yesterday in the cue, but it never triggered to our liking.)

Bringing the daily and weekly time-frames into focus: Silver is in a month-long uptrend within a broader uptrend from the December lows, but has been facing solid resistance around the $18 level. Friday’s risk aversion spike took it above to $18.30, but the rally eventually failed and silver closed beneath $18. Today, we are seeing another strong push through the $18 barrier and a run at the Friday spike highs.

The issue we take with becoming bullish on silver is two-fold: For starters, a solid close above $18 still doesn’t clear an even bigger zone of resistance which began back in June 2013. There are several swing low inflection points created during 2013 and 2014 and one swing high turning point in 2015 which creates a pretty strong barrier between approximately $18.20 and $19, with the largest concentration between ~$18.40 and $18.60.

The second reason for caution from the long-side is the recent increase in net longs by large speculators is back to just shy of the previous record. (Gold large specs are back to record long.) The fact trend followers are herding with so much size into a critical zone of resistance leaves us to wonder if there is enough demand left to push through. 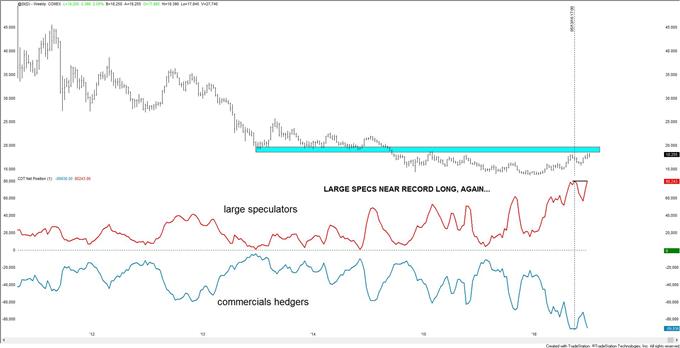 For now, the charts don’t warrant a short position given the prevailing short and intermediate-term uptrends and lack of negative response yet to resistance. Conversely, buying into resistance with the market already substantially long does not present an appealing trade as well.

Find out what you might be doing wrong in your trading and reinforce what you are doing right. Check out our free guide, ‘Traits of Successful Traders’ for more details.

You can follow Paul on Twitter at @PaulRobinsonFX, and/or email him at instructor@dailyfx.com with any questions, comments, or concerns.