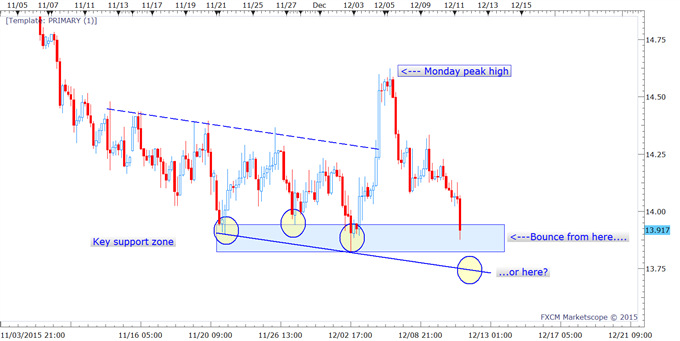 Silver prices are currently trading in the $13.95/82 area where a bounce has developed on three occasions since November 23rd. Can it make it a fourth? At the immediate moment the benefit of the doubt must be given to the short-term downward trend dating back to the Monday high at $14.62.

A break below the 12/2 low at $13.82 does not necessarily open the door up for an aggressive move lower, though, due to the existence of a bottom-side parallel around the $13.75 mark. So, even if we see a breakdown below the 12/2 low, shorts could be reined in fairly quickly.

While certainly not ‘feeling it’ from the long-side, as a hard-fastened rule I don’t short into support, just as I don’t buy into resistance. With that in mind, in the support zone or at the lower parallel should we see a strong bullish reversal or engulfing bar on the 4-hr to 1-day time-frame I am inclined to believe a rebound could ensue in the very near-term, despite the generally pervasive down-trend.

For the aggressive-minded trader looking to establish a long this could soon be a good place to start. If, however, you have been riding a short position lower, this is not a bad spot to at least tighten up trailing stops or book profits altogether.

Next week’s FOMC meeting looms large. The Fed is expected by many to raise rates for the first time since ending its last tightening cycle in 2006. Trading between now and then is likely to become erratic as market participants square up positions ahead of such a major event. Taking that into consideration, from a tactical standpoint taking only quick ‘hit-and-run’ trades or standing aside all together – in any asset class – makes the most sense.