Crude oil prices had a strong start to the year, in part energized by two swans: the record cold spell that froze over Texas and the blockage of the Suez Canal. It’s been an interesting few weeks, but now that these mini-crises are in the rearview mirror, some of the recent bullish catalysts (supply constraints) have been lost. Yet even as crude oil prices remain largely directionless for the past few weeks, failing in their initial bullish breakout attempt above the descending trendline from the July 2008 (all-time high) and June 2014 highs, longer-term technical studies continue to suggest that bulls haven’t thrown in the towel just yet.

Crude oil prices have a relationship with volatility like most other asset classes, especially those that have real economic uses – other energy assets, soft and hard metals, for example. Similar to how bonds and stocks don’t like increased volatility – signaling greater uncertainty around cash flows, dividends, coupon payments, etc. – crude oil tends to suffer during periods of higher volatility.

Heightened uncertainty in financial markets due to increasing macroeconomic tensions decreases theoretical demand for energy; signs that the global economy is recovering from the coronavirus pandemic reduces uncertainty, and thus, volatility. 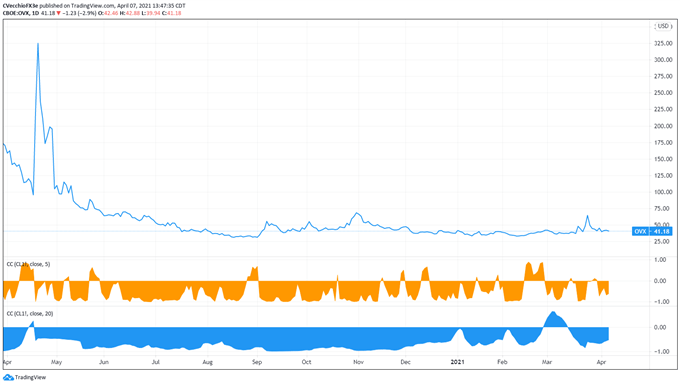 Oil volatility (as measured by the Cboe’s gold volatility ETF, OVX, which tracks the 1-month implied volatility of oil as derived from the USO option chain) closed out the week at 41.18. Oil volatility is back at levels seen throughout 2019; the situation has been and appears to be poised to remain stable, as has been the case for most of the past nine-month (discounting volatility leading into the US elections in November). 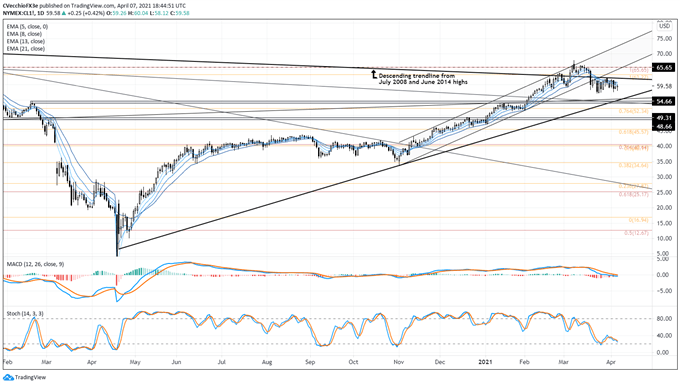 Crude oil prices are no longer the ascending channel that defined price action since the November 2020 low (incidentally the first trading day of the month), having fallen through channel support in mid-March and failing to stage a recovery thus far. This drop also constituted a drop below the descending trendline from the July 2008 and June 2014 highs, suggesting a false bullish breakout (more on that below).

But even with the drop in crude oil prices, momentum has shifted from bullish to neutral, but not to bearish. Crude oil prices are intertwined among their daily 5-, 8-, 13-, and 21-EMA envelope, which is in neither bearish nor bullish sequential order. Daily MACD is hugging its signal line, while daily Slow Stochastics continue to trickle towards oversold territory. It remains to be seen if price action over the past two weeks is a bear flag or simply bulls finding their footing anew. 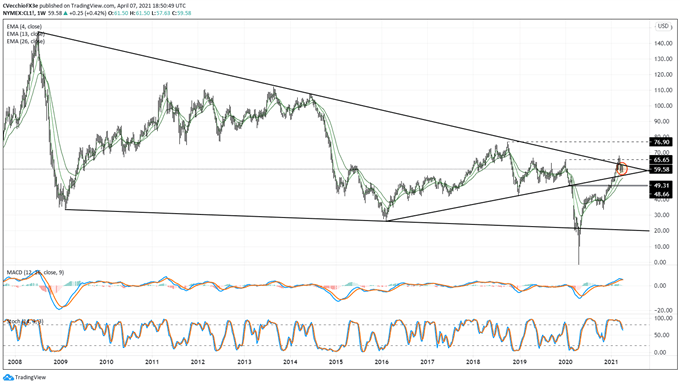 In the first of two weekly charts, we see that there has been a failed bullish breakout above the descending trendline from the July 2008 and June 2014 highs. Crude oil prices were only above this trendline for two weeks on a closing basis, and concerningly, the three-week stretch around the failed breakout appears to have taken the shape of an evening star candle cluster, a topping pattern. 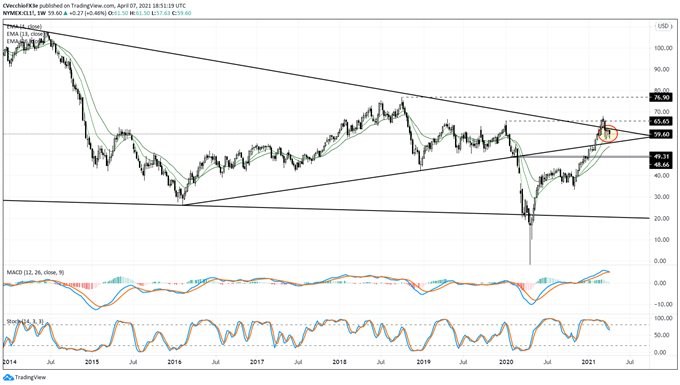 Yet when we take a closer look at the weekly timeframe, we see that the ensuing periods post-evening star candle cluster have failed to produce follow through to the downside, with several hammer candles forming thereafter. The long weekly wicks speak to strong demand in the market right at the weekly 13-EMA, which is effectively a moving average of the past one quarter of price action. Only if the weekly 13-EMA breaks on a closing basis would the perspective shift from neutral to bearish. For now, we remain open to a return back to a bullish breakout opportunity above the multi-year descending trendline. 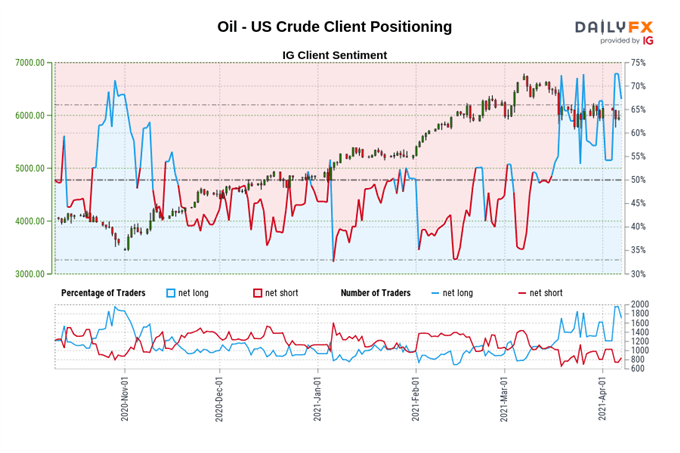