WTI oil running into a pair of trend-lines inside channel

WTI crude oil sprinted higher last week, but has since lost some momentum as has been the case over the past two-plus months, whether oil was running higher or selling off – near-term swings don’t last long. This time price stalled at a trend-line extending down off the October 2018 high over the Saudi spike in September.

Thus far we aren’t seeing sellers step up, but that has occurred a couple of times since October, where rallies were quick and strong, prices held the rise, only to then sink lower quickly over the next 1-3 days. A decline from here will keep the painful pattern alive of choppy price action.

At some point oil will get out of the push-pull struggle its in and break free of the channel, but until it does it will continue to be a market for traders looking to fade swings, not momentum. It appears at some point, though, a downside break will occur, but the lower parallel of the channel and 55 will need to break.

For now, watch how oil reacts off trend resistance. A breakdown from here could once again test the tepid uptrend from early October. 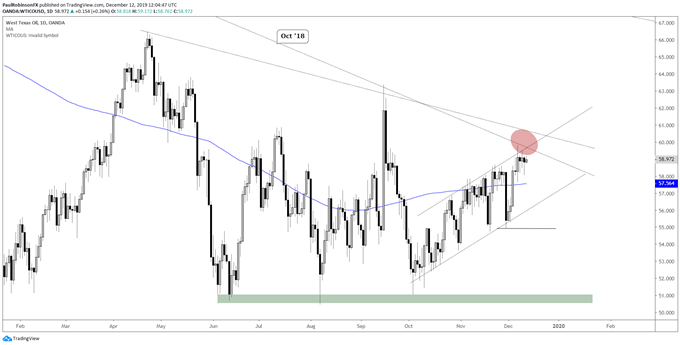 Unsurprisingly, the Brent contract has trend-lines running down on it from last year and earlier this year. But further adding to resistance is the 200-day MA which is right at current levels. A turn down from here looks like the next move, so in the event of weakness watch the lower parallel of the tight channel since October.

The longer-term tilt of the chart is lower, and on that it would seem that at some point we will see the lower parallel of the channel break and see another test of the important 2016 trend-line. Perhaps with downtrend resistance tested here, a break down will grow some legs. But not before price gets outside of the channel and below 61.

***Updates will be provided on the above ideas as well as others in the trading/technical outlook webinars held at 1030 GMT on Tuesday and Friday. If you are looking for ideas and feedback on how to improve your overall approach to trading, join me on Thursday each week for the Becoming a Better Trader webinar series.