For an intermediate-term fundamental and technical viewpoint, check out the Crude Oil Forecast.

WTI crude oil isn’t positioned much differently than it was a week ago, pressed up against the top of the channel and 200-day MA. It’s been a grind in oil since the beginning of October, but like all choppy periods of trading they do come to an end with a solid directional move as the result.

The period of back-and-forth is forming a channel resembles that of a bear-flag given the strong down-move prior to its development. But before the pattern can be confirmed as a bearish period of digestion, we need to see a break of the lower parallel.

In the event it does, the 50-line will quickly come into play along with the potential to see the 2016 trend-line reached, a target that has admittedly been in mind for several months. If it gets there it will have been a very long and winding road to do-so.

In the event that oil stays within the confines of the channel and can break above the 200-day, there is a chance at some point we see a pickup in buying pressure that takes the commodity up to the October 2018 trend-line, nearing the Saudi oil-spike in September.

The bottom line is that we need to be prepared for oil to make a move soon, but be patient in doing so as further confirmation is needed to clarify the picture. 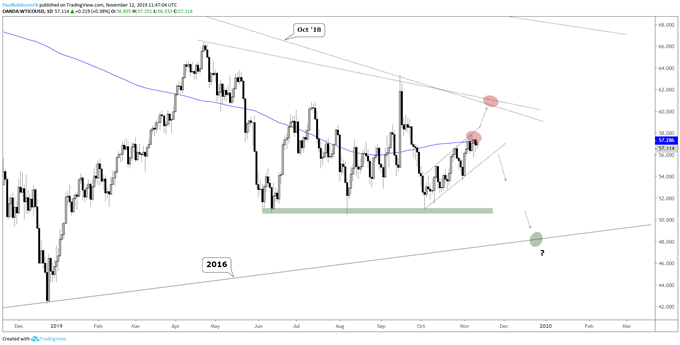 Brent is of course looking like its sibling contract, but broadly speaking it has a more bearish tilt to it with the chart over the last few months leaning lower to a slightly larger degree than WTI. Illustrating this, is the close proximity of the 2016 trend-line. To reach it wouldn’t even require a break below the lows in August and October.

As is the case with WTI, a break of the lower parallel from the October low is needed to get Brent running downhill, while a continued push is set to have price testing top-side trend thresholds. The 200-day and October 2018 trend-line like up just under 65.